Sign Up
Log In
Purchase a Subscription
You are the owner of this article.
Edit Article Add New Article
You have permission to edit this article.
Edit
Home
Business
News
Sports
Features
Opinion
Obituaries
Local Events
Announcements
e-Edition
Classifieds
Share This
1 of 2 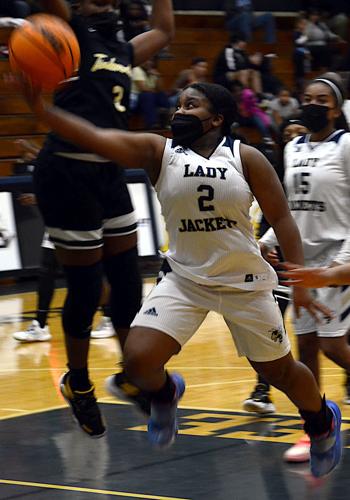 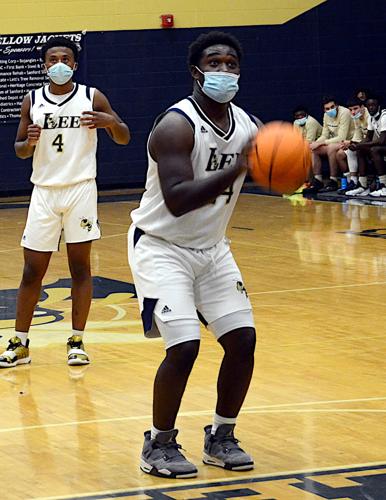 The Jackets’ Dayreon Jennings attempts a free throw as teammate Malachi McLean defends against a fastbreak in the event of a miss. Lee started out matching high-octane Hoke on Friday but couldn’t keep pace for the whole game.

The Jackets’ Dayreon Jennings attempts a free throw as teammate Malachi McLean defends against a fastbreak in the event of a miss. Lee started out matching high-octane Hoke on Friday but couldn’t keep pace for the whole game.

Through six games this season, Lee County’s women’s basketball team had not claimed a win, but the Lady Jackets had played hard. Typically, when a team keeps working at it, good outcomes eventually follow.

Lee got its good outcome on Friday night, in round two of Sandhills Athletic Conference play. The Lady Jackets made 23 steals and routed Hoke County 57-23 to grab that much-needed first victory of the 2021-22 season.

Lee (1-6, 1-1 SAC) had a rough night the previous evening in a loss at 4A power Green Level, but the Lady Bucks, who are also 4A but not nearly so formidable, ran into a a Lady Jacket team hungry for a win. Lee ripped out to a 16-3 lead in the first quarter and maintained that edge into halftime, up 23-10. When the home team tore off 21 more points in the third quarter, this game was over.

The Lady Jackets led 12-0 before Hoke even scratched. Alicia Hancock scored four of the first six baskets, with Alyssa Martin and Gabrielle McLean getting the other two. The second half began in similar fashion, although this time Lee dialed long distance. Kaleah Cotton and then Martin opened the third quarter with back-to-back 3-pointers for a 29-10 lead.

Five more unanswered points made for an 11-0 run before Hoke (1-6) scored again.

Hoke 80, Lee 50The men’s game was just as much fun, for a while. Then Hoke pulled away from the hosts with an explosive offensive display.

The Bucks (6-1, 2-0 SAC) are off to an impressive start this season, with an 18-point blowout of Scotland in their conference opener and just one loss in their first seven games, by two points at Seventy-First 11 days ago. Against Lee County, Hoke was caught back on its heels early on. The Yellow Jackets, led by Malachi McLean and Nolan Brown at both ends of the floor, more than held their own in the first several minutes of the game. When McLean hit a 3-pointer early in the second quarter, Lee held a surprising 22-20 lead.

Things went sour for the home team after that. The Yellow Jackets kept competing, but were at a big disadvantage against a deep and athletic 4A team that outrebounded them by a large margin.

Both Yellow Jacket teams have one more game before the holiday, on Thursday night at Overhills, and then the Lee men are off until after Christmas, when they will compete in a three-day holiday tournament they are hosting.