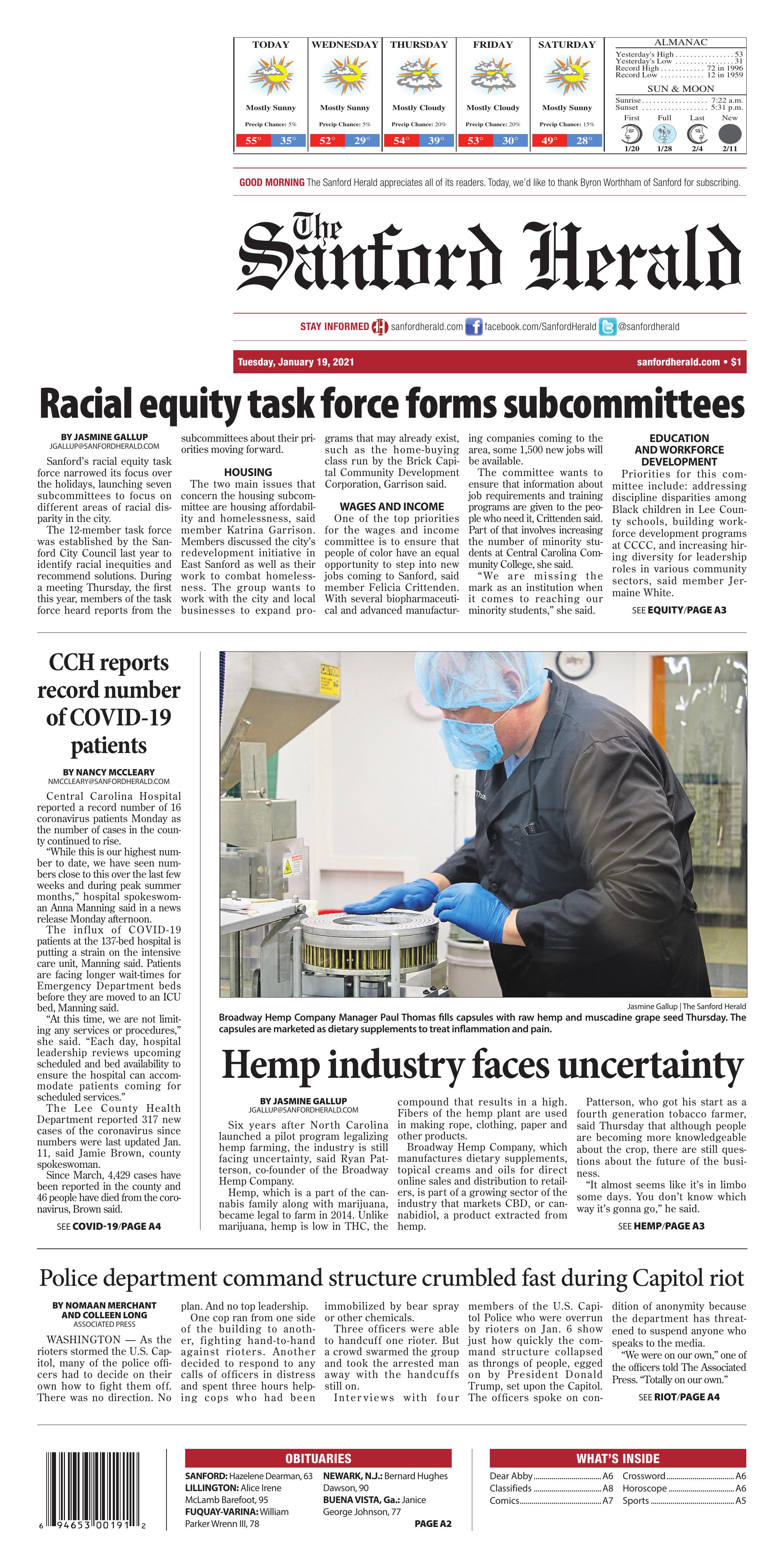 Sanford’s racial equity task force narrowed its focus over the holidays, launching seven subcommittees to focus on different areas of racial disparity in the city.

The 12-member task force was established by the Sanford City Council last year to identify racial inequities and recommend solutions. During a meeting Thursday, the first this year, members of the task force heard reports from the subcommittees about their priorities moving forward.

HousingThe two main issues that concern the housing subcommittee are housing affordability and homelessness, said member Katrina Garrison. Members discussed the city’s redevelopment initiative in East Sanford as well as their work to combat homelessness. The group wants to work with the city and local businesses to expand programs that may already exist, such as the home-buying class run by the Brick Capital Community Development Corporation, Garrison said.

Wages and IncomeOne of the top priorities for the wages and income committee is to ensure that people of color have an equal opportunity to step into new jobs coming to Sanford, said member Felicia Crittenden. With several biopharmaceutical and advanced manufacturing companies coming to the area, some 1,500 new jobs will be available.

The committee wants to ensure that information about job requirements and training programs are given to the people who need it, Crittenden said. Part of that involves increasing the number of minority students at Central Carolina Community College, she said.

“We are missing the mark as an institution when it comes to reaching our minority students,” she said.

Criminal Justice The priorities of the criminal justice committee include bail bond reform, to allow those charged with less serious crimes to await trial outside of jail; the provision of counseling or education to people in jail; and the formation of a pretrial release policy by the city, said member Fred Webb Jr. The committee also wants to look at reducing gun and gang violence and providing more mental healthcare for inmates, Webb said.

Health The health committee is currently considering three main issues — access to healthcare, the opioid epidemic and mental health, said member Vonda Reives. In addition to filling gaps in services, the committee wants to combat social barriers to healthcare such as income, transportation, housing and food resources, Reives said. The committee talked about how they might start a free clinic for people in the community. Members also hope to spread awareness about healthcare resources to people in need, Reives said.

Representation and Inclusion One of the main issues for this committee is to ensure information about service opportunities and openings in local government are spread to Black communities, said Jermaine White. Building an outreach program and educating people about how they can get involved is one of the main ways the committee can increase diversity in decision-making groups, White said. He also raised the idea of providing financial or other resources to people wishing to run for office, and developing a city office of equity and inclusion where people could turn to for information and resources.

“We’re really looking at opportunities to meet people where they are,” White said.

Communications and Community Responsibility In addition to reducing inequality in various areas in the community, the task force also wants to inform people about their work, educate people about racial inequities and build relationships with stakeholders to create change, said member Jeanette Peace. The impact of the committee should stretch beyond just its members, Peace said. The committee wants to ensure people across the city know what the task force’s final recommendations are and hold city officials accountable to acting on them, she said. Another of the committee’s goals is to educate people and empower them to advocate for themselves, Peace said.

At the end of the meeting, many committee members agreed they want to make a lasting impact on city, not just submit a report. Although it will be the responsibility of city officials to decide whether to enact the task force’s recommendations, said facilitator Charles Mellette, the task force doesn’t intend to simply drop off their report and then walk away.

The task force will continue to meet at 6 p.m. on the second Thursday of each month.

Hemp, which is a part of the cannabis family along with marijuana, became legal to farm in 2014. Unlike marijuana, hemp is low in THC, the compound that results in a high. Fibers of the hemp plant are used in making rope, clothing, paper and other products.

Broadway Hemp Company, which manufactures dietary supplements, topical creams and oils for direct online sales and distribution to retailers, is part of a growing sector of the industry that markets CBD, or cannabidiol, a product extracted from hemp.

Patterson, who got his start as a fourth generation tobacco farmer, said Thursday that although people are becoming more knowledgeable about the crop, there are still questions about the future of the business.

“It almost seems like it’s in limbo some days. You don’t know which way it’s gonna go,” he said.

North Carolina’s pilot program was set to expire late last year, but the Broadway Hemp Company and other farmers got a reprieve when the program was extended through 2021. The 2018 federal Farm Bill allowed pilot programs to continue and made the production and sale of hemp products across state lines legal, as long as the product contains less than 0.3% THC.

Even with those updated regulations, however, there are still uncertainties when it comes to what hemp producers can and can’t do, Patterson said.

“There are a lot of gray areas that we’re still working through, and that’s not going to get cleared up until we get some guidance from (the Food and Drug Administration),” Patterson said. “I think that’s what’s holding the industry back from growing more and growing faster. A lot of your larger companies are not going to touch it until you get some clear FDA guidance.”

The FDA has yet to release regulations about how CBD products such as oils and supplements can be marketed and sold. With a scarce amount of research on the substance, the FDA has yet to approve it as a dietary supplement or medicine, despite some anecdotal claims by retailers.

But Patterson said he is “cautiously optimistic” about the future of his business.

The company hopes to one day explore the potential of minor cannabinoids like CBG, CBN and CBC which are also found in the plant, Thomas said.

Another area in which hemp producers need guidance is the actual growing of hemp, Patterson said. As one of the first producers, he said, he was mostly working by trial and error.

“When we started in 2017, I was just trying to grasp at anything I could find to guide me in growing the plant,” Patterson said. “North Carolina has soybean production guides, they have tobacco production guides — but you’re not going to find a hemp production guide. We had a lot of costly mistakes.”

As a business in a largely unexplored industry, the Broadway Hemp Company relies primarily on providing a consistent product, according to Patterson.

“We want to have that traceability from seed to bottle so we know where it’s been, how it’s handled,” he said. “We stand behind (our products) 100% and that’s helped. We hope, to maintain our reputation and move us forward.”

Central Carolina Hospital reported a record number of 16 coronavirus patients Monday as the number of cases in the county continued to rise.

“While this is our highest number to date, we have seen numbers close to this over the last few weeks and during peak summer months,” hospital spokeswoman Anna Manning said in a news release Monday afternoon.

The influx of COVID-19 patients at the 137-bed hospital is putting a strain on the intensive care unit, Manning said. Patients are facing longer wait-times for Emergency Department beds before they are moved to an ICU bed, Manning said.

“At this time, we are not limiting any services or procedures,” she said. “Each day, hospital leadership reviews upcoming scheduled and bed availability to ensure the hospital can accommodate patients coming for scheduled services.”

Since March, 4,429 cases have been reported in the county and 46 people have died from the coronavirus, Brown said.

The seven-day rolling average of new cases in the county is 43.14 with the percentage of positive tests at 16.3%, the release said.

The hospital surge was expected in January and February because respiratory illnesses are more common during those months, Manning said.

“Patient surge could be related to a combination of things including holiday traveling and gathering, community transmissions or the time of year,” she said in the release.

Lee County continues to be classified as red on the state’s COVID-19 County Alert System, which indicates critical community spread.

Individuals are eligible if they are frontline health workers, residents or caretakers in long term-care facilities or people 65 and older.

Additional information is available at covid19.ncdhhs.gov/vaccines.

The N.C. Department of Health and Human Services did not post new numbers Monday because of the Martin Luther King Jr. Day holiday.

Sunday’s state numbers included 6,811 new cases, bringing the total in North Carolina since March to 674,637. The daily percent of positive tests stands at 10%.

COVID-19 has claimed the lives of 8,083 North Carolina residents with another 3,862 hospitalized, according to NCDHHS. Forty-six Lee County deaths are attributed to the virus.