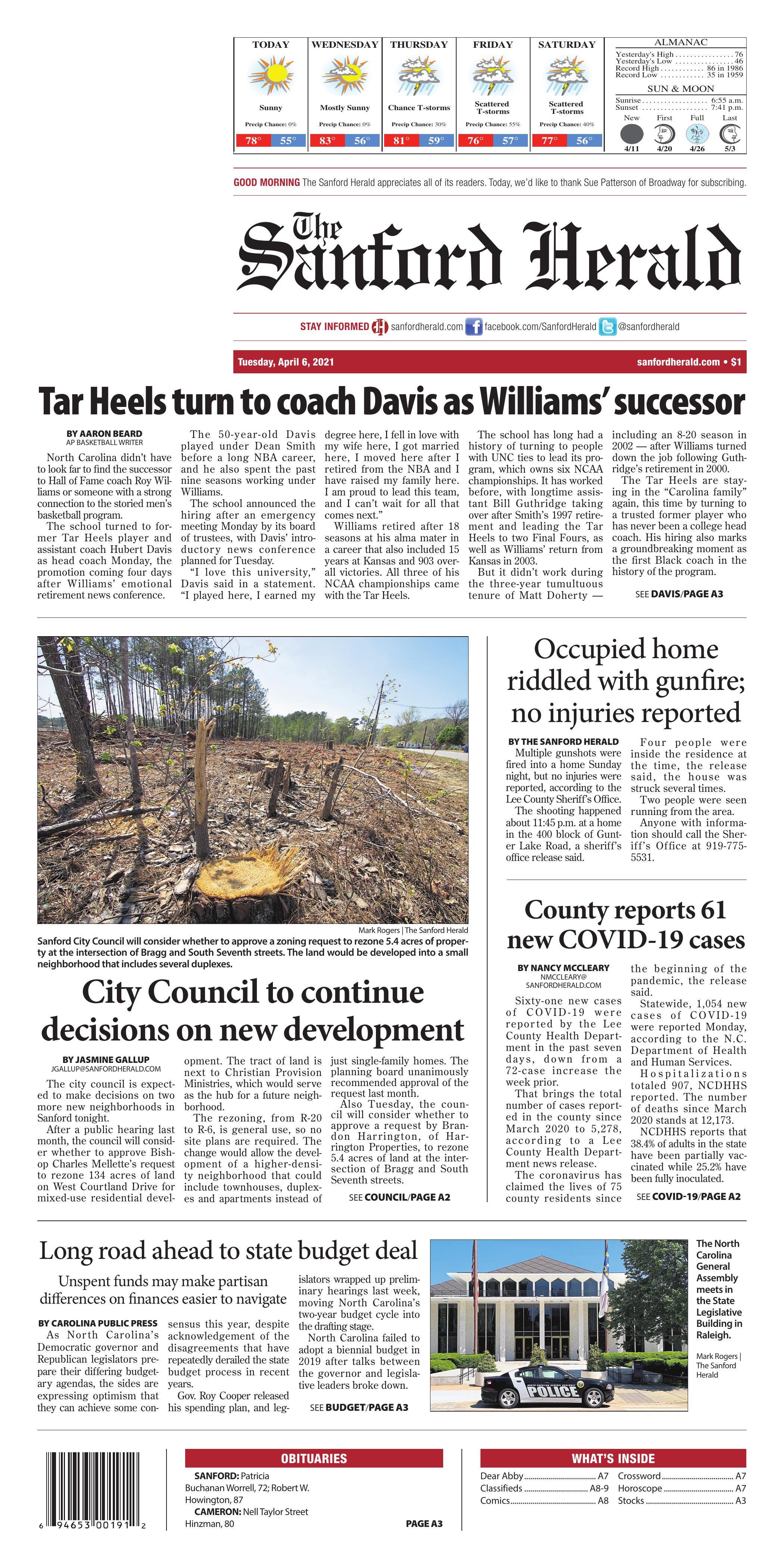 Sanford City Council will consider whether to approve a zoning request to rezone 5.4 acres of property at the intersection of Bragg and South Seventh streets. The land would be developed into a small neighborhood that includes several duplexes.

The city council is expected to make decisions on two more new neighborhoods in Sanford tonight.

After a public hearing last month, the council will consider whether to approve Bishop Charles Mellette’s request to rezone 134 acres of land on West Courtland Drive for mixed-use residential development. The tract of land is next to Christian Provision Ministries, which would serve as the hub for a future neighborhood.

The rezoning, from R-20 to R-6, is general use, so no site plans are required. The change would allow the development of a higher-density neighborhood that could include townhouses, duplexes and apartments instead of just single-family homes. The planning board unanimously recommended approval of the request last month.

Also Tuesday, the council will consider whether to approve a request by Brandon Harrington, of Harrington Properties, to rezone 5.4 acres of land at the intersection of Bragg and South Seventh streets.

The land would be home to small neighborhood consisting of 10 duplexes and two detached, single-family homes. The development includes 22 lots with a minimum size of 6,000-square-feet.

One point of conflict was the developer’s inability to retrofit two city streets, Barnes Street and Ray Avenue, with curb and gutter, as is usually required. The developer indicated the project is cost-prohibitive, although sidewalks would be installed.

The planning board voted 4-1 to recommend approval of the project, with the dissenting member saying curb and gutter should be required, per the recommendation of the city engineering department.

• an amendment to the incentive package for new economic development Project Star;

• approval of a plan to improve the city’s water and wastewater systems over the next 10 years; and

• non-contiguous annexation of 260 acres of land where N.C. 421 intersects Deep River, and south of Cotten Road, for the second phase of development of the Village of Cumnock neighborhood.

The North Carolina General Assembly meets in the State Legislative Building in Raleigh.

As North Carolina’s Democratic governor and Republican legislators prepare their differing budgetary agendas, the sides are expressing optimism that they can achieve some consensus this year, despite acknowledgement of the disagreements that have repeatedly derailed the state budget process in recent years.

North Carolina failed to adopt a biennial budget in 2019 after talks between the governor and legislative leaders broke down.

Cooper vetoed the legislature’s plan shortly after its passage that June, mainly over the failure to include Medicaid expansion under the Affordable Care Act.

Since then, a series of consensus mini-budgets, supplemental bills and an automatic budget backstop that maintains funding at prior-year levels have funded the state agencies.

At his $27.3 billion budget announcement last week in Raleigh, Cooper was cautiously optimistic that this year’s debate wouldn’t dissolve into disagreement, saying the dialogue, which dwindled to nil in 2019, was much better this year.

The pandemic and the urgency to move forward on infrastructure and reopening schools has changed the dynamics, he said, even as he acknowledged that last year’s election left all the key players in place.

“Unlike the last budget cycle we had, I’ve had numerous conversations with both Republican and Democratic leadership,” Cooper said.

“And one thing we agreed on is that first, the people of North Carolina elected us again. So, we’re back in the same situation that we were, and we owe it to them to do the best that we can to find a path forward.”

House Speaker Tim Moore said while Cooper’s plan had some shared priorities, the General Assembly would stick to its own budget strategies.

“I look forward to reaching consensus on a state budget that works for all North Carolinians to avoid further vetoes by the governor of valuable funds that taxpayers earned and communities deserve,” Moore said in a statement.

Money left unspentOne consequence of the prior years’ stalemate may have made reaching a deal this year a little easier.

The budget standoff boosted the state’s bottom line by delaying expansions, raises and major spending initiatives. That, along with a stronger-than-anticipated economic recovery and substantial federal relief has resulted in a large, although temporary, fund balance.

Going into this year, budget writers will start with roughly $4 billion in unspent funds.

Cooper’s budget plan includes a pay raise for teachers averaging 10%, a roughly 7.5% raise and bonuses for all school personnel, and a 5% raise for state employees. State retirees would receive a 2% cost-of-living adjustment.

Cooper also wants a $4.7 billion bond referendum to go to the voters in November. It includes funds for K-12, university and community college construction and repair; water and sewer infrastructure; and parks, museums and aquariums.

Other major initiatives in Cooper’s proposed budget include restoration of the earned income tax credit, a new child and dependent care tax credit, and a major boost for the state’s parks, land conservation and water quality trust funds.

Meanwhile on Jones StreetHouse and Senate leaders are moving ahead with their own initiatives after two months of joint appropriations hearings that set the stage for this year’s plan.

Senate budget committees will start putting together their plans next month. The rollout for some items in the plan has already started.

A group of senators from Eastern North Carolina also recently announced that they’ll seek additional help with flood mitigation for inland counties hit by repeated flooding. Cooper has similar initiatives in his plan.

No matter what happens with the budget, it won’t be the only major spending plan this year. Cooper said he will also announce a proposal for how to spend a wave of federal funds coming to North Carolina from the American Rescue Plan.

In addition to relief for individuals and businesses, state government is expected to receive roughly $5.3 billion along with $277 million for capital projects. County, tribal and municipal governments will get another $3.3 billion.

Also on the horizon is North Carolina’s share of a federal infrastructure plan, which is expected to be the Biden administration’s next major legislative push.

Multiple gunshots were fired into a home Sunday night, but no injuries were reported, according to the Lee County Sheriff’s Office.

The shooting happened about 11:45 p.m. at a home in the 400 block of Gunter Lake Road, a sheriff’s office release said.

Four people were inside the residence at the time, the release said, the house was struck several times.

Two people were seen running from the area.

Sixty-one new cases of COVID-19 were reported by the Lee County Health Department in the past seven days, down from a 72-case increase the week prior.

That brings the total number of cases reported in the county since March 2020 to 5,278, according to a Lee County Health Department news release.

The coronavirus has claimed the lives of 75 county residents since the beginning of the pandemic, the release said.

Statewide, 1,054 new cases of COVID-19 were reported Monday, according to the N.C. Department of Health and Human Services.

Hospitalizations totaled 907, NCDHHS reported. The number of deaths since March 2020 stands at 12,173.

NCDHHS reports that 38.4% of adults in the state have been partially vaccinated while 25.2% have been fully inoculated.

The county is encouraging residents to get vaccinated against the virus to help stop its spread, the release said.

Vaccinations are open to anyone 18 and older. The Pfizer vaccine is available to 16- and 17-year-olds.

A pre-registration form can be found online at leecountync.gov/covid19. Once the form is submitted, someone from the county staff will make contact within five business days to set up an appointment, the release said.

Anyone who is feeling sick should stay at home and away from others until being tested, the release said.

Residents can help prevent the spread of COVID-19 by practicing the Three W’s — wearing a mask, waiting 6 feet apart and washing hands.