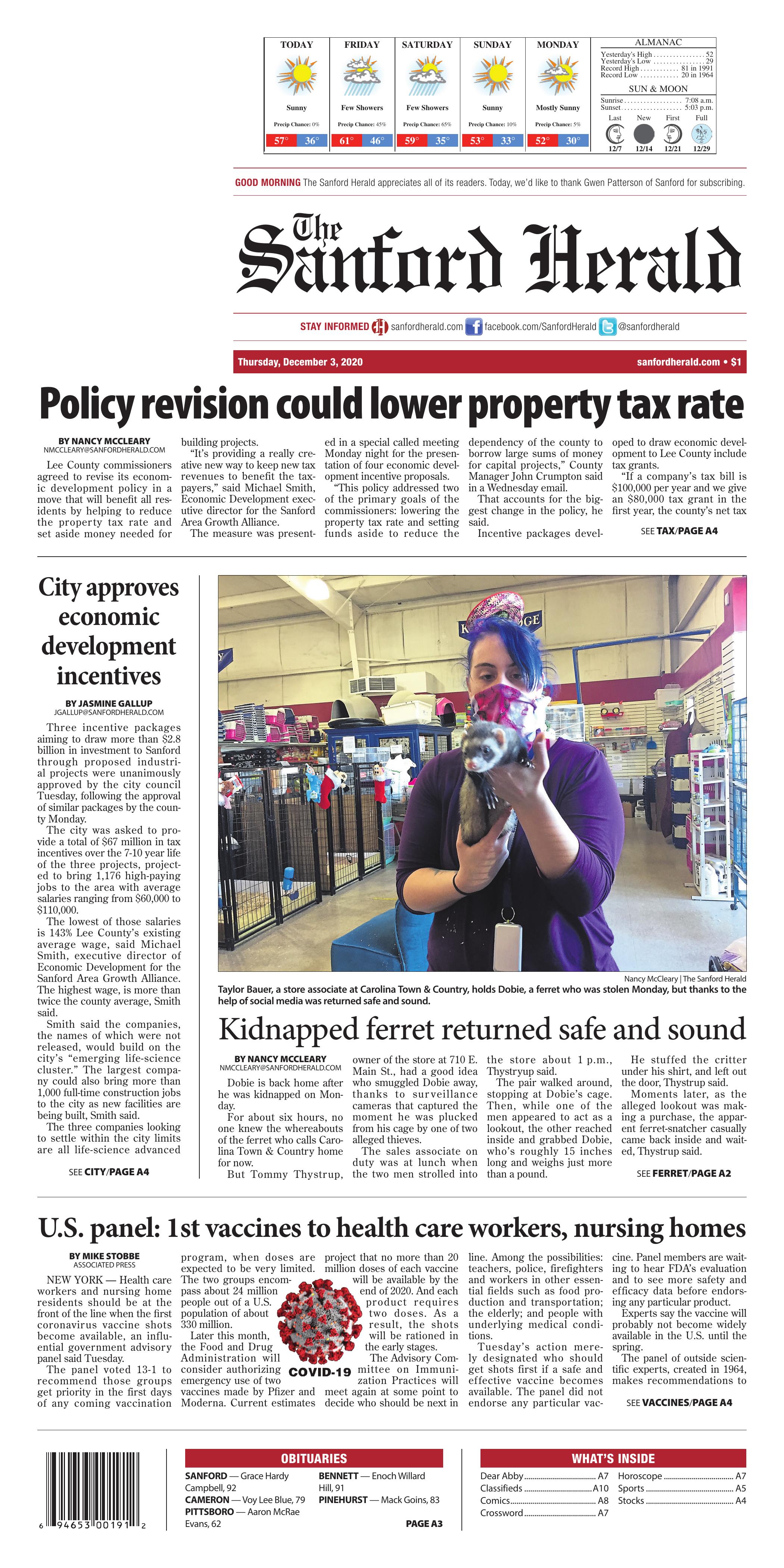 Lee County commissioners agreed to revise its economic development policy in a move that will benefit all residents by helping to reduce the property tax rate and set aside money needed for building projects.

The measure was presented in a special called meeting Monday night for the presentation of four economic development incentive proposals.

“This policy addressed two of the primary goals of the commissioners: lowering the property tax rate and setting funds aside to reduce the dependency of the county to borrow large sums of money for capital projects,” County Manager John Crumpton said in a Wednesday email.

That accounts for the biggest change in the policy, he said.

The tax rate is currently 77.5 cents per $100 of assessed property value. The larger the project, the bigger the impact on lowering the tax rate, Crumpton said.

The remaining $10,000 can also be used toward lowering the tax rate or it can be designated for the capital reserve fund to help pay for capital projects of $500,000 or more, Crumpton said.

“Everybody gets a little bit in the end,” Commissioner Andre Knecht said in the meeting. “It makes business going forward a lot easier for us all.”

The revision is what Dalrymple said the board has worked toward for five or six years. SAGA’s economic development efforts have played a major role.

“They’ve brought industrial development here and you can’t lower taxes unless you have an expanded tax base,” Dalrymple said.

The policy sets a means for the county to increase revenues in the future, Smith said.

“It’s a smart way to be progressive.”

Taylor Bauer, a store associate at Carolina Town & Country, holds Dobie, a ferret who was stolen Monday, but thanks to the help of social media was returned safe and sound.

Dobie is back home after he was kidnapped on Monday.

For about six hours, no one knew the whereabouts of the ferret who calls Carolina Town & Country home for now.

But Tommy Thystrup, owner of the store at 710 E. Main St., had a good idea who smuggled Dobie away, thanks to surveillance cameras that captured the moment he was plucked from his cage by one of two alleged thieves.

The sales associate on duty was at lunch when the two men strolled into the store about 1 p.m., Thystryup said.

The pair walked around, stopping at Dobie’s cage. Then, while one of the men appeared to act as a lookout, the other reached inside and grabbed Dobie, who’s roughly 15 inches long and weighs just more than a pound.

He stuffed the critter under his shirt, and left out the door, Thystrup said.

Moments later, as the alleged lookout was making a purchase, the apparent ferret-snatcher casually came back inside and waited, Thystrup said.

The two then left together, he said.

Dobie’s disappearance was noticed around 4 p.m.

Thystrup wasted no time working to find out who was responsible and get Dobie home safely.

He called the Sanford Police Department about 4:15 p.m. and filed a report of the incident which was classified as larceny-shoplifting.

He also went through the surveillance video and found the pair. One of them was mask-compliant, the other was not, according to Thystrup.

Either way, the photos were good enough that Thystrup posted them on the store’s Facebook page, asking for help in identifying the culprits so he could make contact with them.

“We were overwhelmed by phone calls here at the store,” Thystrup said.

Eventually, a relative of the not-so-dynamic duo contacted Thystrup and negotiated a pact: Dobie would be returned, the photos would be taken off the Facebook page and no charges would be filed. Thystrup agreed.

In the cover of darkness, Dobie was returned, safe and somewhat sound.

“He was a little shaken up,” Thystrup said.

The animal, a cousin of the weasel, is a favorite of the shop’s customers.

“Everybody loves him,” Thystrup said of Dobie, who’s a little over a year old. “He’s very friendly.”

When Dobie was younger, a family purchased him as a pet from Thystrup’s store and took him home. The relationship didn’t work out and the family returned Dobie. He’s been at Carolina Town & Country since looking for a new home, Thystrup said.

At 4:52 p.m. Monday, a picture of Dobie’s furry face was posted to the Carolina Town & Country page with this message:

“From the bottom our hearts, thank you to all who shared. Our little guy is back safe and sound after his adventure.”

Three incentive packages aiming to draw more than $2.8 billion in investment to Sanford through proposed industrial projects were unanimously approved by the city council Tuesday, following the approval of similar packages by the county Monday.

Smith said the companies, the names of which were not released, would build on the city’s “emerging life-science cluster.” The largest company could also bring more than 1,000 full-time construction jobs to the city as new facilities are being built, Smith said.

The three companies looking to settle within the city limits are all life-science advanced manufacturing companies, according to Smith. One other company, a building products manufacturer, is considering a location in Central Carolina Enterprise Park in Lee County, Smith said Tuesday.

Sanford is competing for the projects against three to four other cities in North Carolina; other states including Virginia and South Carolina; and one European country, according to Smith

City officials and residents both seemed excited about the potential investment in Sanford, with councilman Sam Gaskins “wholeheartedly” moving to approve the incentive packages and four people emailing in public comments in support of the projects.

“It’s pretty amazing how, after of almost $1 billion last year in economic development, we’re in the running for some of these projects,” said Mayor Chet Mann. “I hope we’re successful in one or all.”

Also Tuesday, a report on the city’s finances in July, August and September was given by Finance Department Director Beth Kelly.

General fund revenues increased this quarter over the first quarter of fiscal year 2019-20, primarily due to the receipt of COVID-19 relief funds through the Coronavirus Aid, Relief, and Economic Security Act, Kelly said.

Expenditures by the street and sanitation departments increased by about $247,000, mostly due to emergency street repairs completed as infrastructure aged and an increase in waste disposal and recycling fees, according to Kelly.

In the utility fund, spending by the distribution and collection department increased about $237,000 due to major water and sewer infrastructure repairs, also necessary as the system ages, Kelly said.

Sales tax revenue in September was up $93,060, or 18.8% over last year, Kelly said. The numbers came as a surprise to the city council, with many members expecting a drop as the coronavirus pandemic continues to depress the economy.

Kelly said the increase in revenue could be due to the big jump in online shopping, or it’s possible that Lee County is lagging behind other counties when it comes to seeing COVID-19’s impact on the local economy.

Several other budget items were taken up by the city council Tuesday. Three amendments were passed to balance the budgets of city projects following their conclusion.

The city had some money left over after finishing site preparation for the new Bharat Forge facility, renovations to Kiwanis Family Park and improvements to water and sewer at the industrial park, according to Kelly. The council put the money back into the utility and general funds.

A little more than $171,000 was left over from the Kiwanis project, which councilman Byron Buckels suggested be set aside for future park projects and improvement. Other council members agreed, reaching a consensus to direct staff to establish a special fund to hold the money in reserve.

• a request by developer Van Groce Sr. to rezone 9.2 acres of land on Commerce Drive for the next phase of construction of a new neighborhood, and;

• a request to rezone a .36-acre tract of land on West Humber Street in order to open a new family care home.