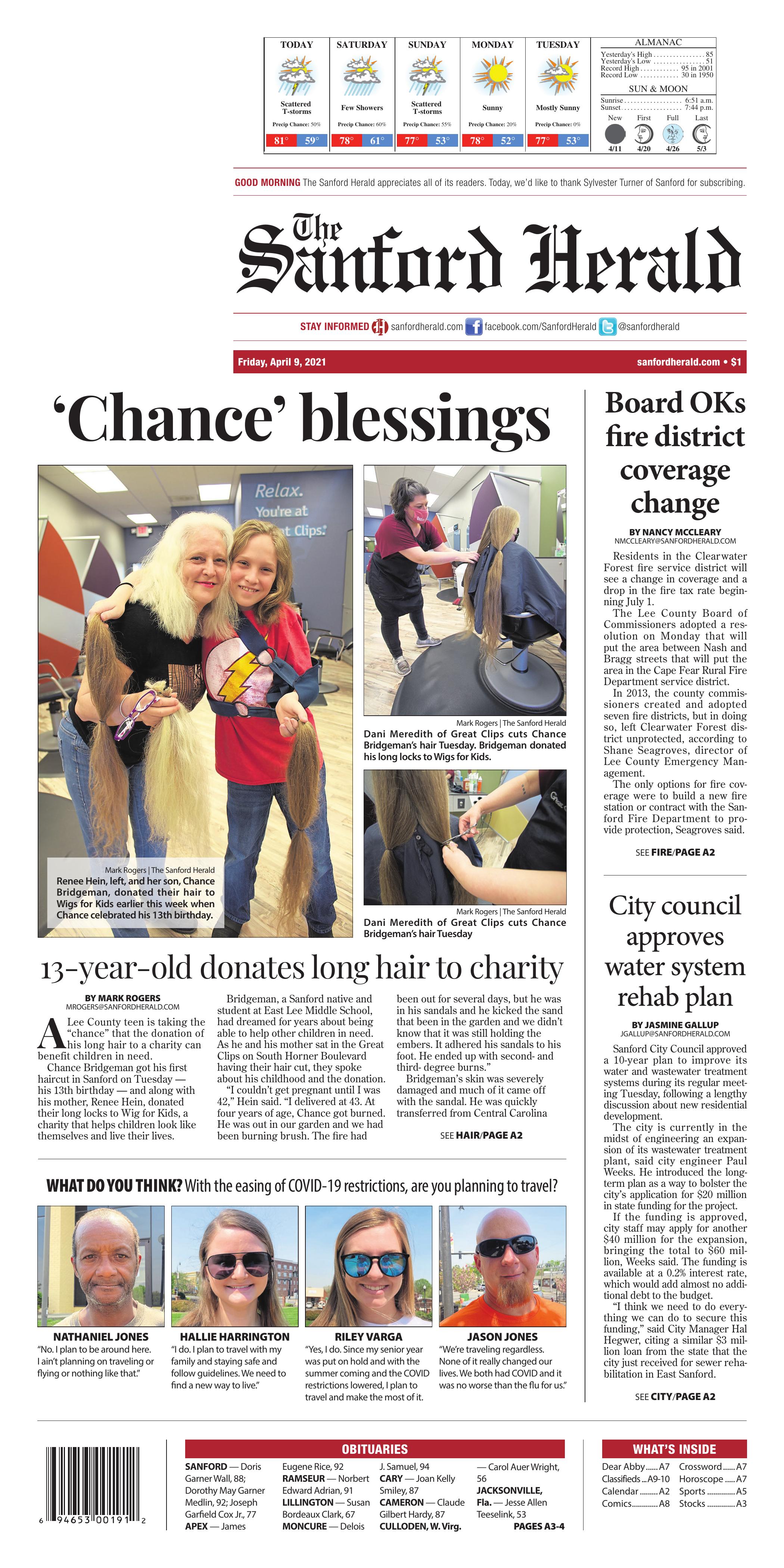 Renee Hein, left, and her son, Chance Bridgeman, donated their hair to Wigs for Kids earlier this week when chance celebrated his 13th birthday.

Chance Bridgeman shows off his shorter hair after having his first haircut at age 13 on Tuesday. Bridgeman donated his hair to Wigs for Kids.

Renee Hein hugs her son, Chance Bridgeman after the pair had their hair cut and donated it to Wigs for Kids.

Renee Hein and Chance Bridgeman show off their long hair before getting it cut.

Cahnce Bridgeman, left, helps his mother, Renee Hein place his hair in an envelope for Wigs for Kids as Dani Meredith of Great Clips looks on.

A Lee County teen is taking the “chance” that the donation of his long hair to a charity can benefit children in need.

Chance Bridgeman got his first haircut in Sanford on Tuesday — his 13th birthday — and along with his mother, Renee Hein, donated their long locks to Wig for Kids, a charity that helps children look like themselves and live their lives.

Bridgeman, a Sanford native and student at East Lee Middle School, had dreamed for years about being able to help other children in need. As he and his mother sat in the Great Clips on South Horner Boulevard having their hair cut, they spoke about his childhood and the donation.

“I couldn’t get pregnant until I was 42,” Hein said. “I delivered at 43. At four years of age, Chance got burned. He was out in our garden and we had been burning brush. The fire had been out for several days, but he was in his sandals and he kicked the sand that been in the garden and we didn’t know that it was still holding the embers. It adhered his sandals to his foot. He ended up with second- and third- degree burns.”

Bridgeman’s skin was severely damaged and much of it came off with the sandal. He was quickly transferred from Central Carolina Hospital by ambulance to Chapel Hill to the burn center.

“When we got to UNC Hospitals, we had no idea that we would be there for 17 days,” Hein said. “I never left him. He had the skin from off of his toes, foot and the bottom of his foot taken off from where the sandals had been. He had to have all the skin cut off his foot. He sat there and screamed.”

Bridgeman had to remain in the hospital until he could walk again, according to Hein.

“That was the reason we ended up there for 17 days,” she said. “After he could walk, they let us go home, but we had to maintain the burn and change the dressing three times a day. It probably took us six to eight months for him to be able to really walk again.”

While at UNC Hospitals, Hein said she and Chance would go into the play ward.

“That’s where Chance saw patients that had hair that looked like Bozo (the Clown) — portions that would stick up or we saw children there that had alopecia or chemo and radiation and had lost their hair.”

“I told him they were very sick,” Hein said. “He said, ‘Look mommy, they have no hair.’ I said what would you want for them. He said, ‘I could give them my hair.’ ”

Hein said that while Chance was being treated, a nurse had told them that he had the most beautiful hair. She told them about Wigs for Kids.

“That set us on our mission to grow our hair,” Hein said.

Wigs for Kids was founded in 1981 by Certified Cosmetic Therapist Jeffrey Paul. Since then the organization has been giving children the opportunity to feel good about themselves again. The hair replacement systems are hand-tied and made completely from human hair. Often it can take cuttings from more than 20 individuals to make one of the wigs.

“We never got his hair cut,” Hein said. “When Chance attended school, he was picked on and harassed. He got expelled off the school bus in kindergarten because a little boy had pulled his hair and Chance jumped over the seat and they had a big fight.”

Hein said people they knew and even complete strangers commented on his hair.

Hein said Wigs for Kids had already contacted them about the donation and thanked him personally. Hein said Bridgeman couldn’t sleep because he was so excited.

After his haircut, Bridgeman spoke about the experience.

“I’m light-headed right now,” he concluded. “It makes me happy that other kids can have hair like me. It’s all been worth it.”

Residents in the Clearwater Forest fire service district will see a change in coverage and a drop in the fire tax rate beginning July 1.

In 2013, the county commissioners created and adopted seven fire districts, but in doing so, left Clearwater Forest district unprotected, according to Shane Seagroves, director of Lee County Emergency Management.

The only options for fire coverage were to build a new fire station or contract with the Sanford Fire Department to provide protection, Seagroves said.

“The board opted to contract with the city,” he said at Monday’s meeting.

The Carolina Trace and Northview departments will assist Cape Fear on calls in Clearwater Forest when needed, he said.

“They (residents) get an entire department from Cape Fear, one engine from Carolina Trace and one from Northview,” Seagroves said.

The move eliminates the need to have coverage provided by the city and drops the Clearwater Forest fire service tax from 18.7 cents to 12 cents per $100 of assessed property value.

“This will be a cost savings to people of the district,” Seagroves said.

The board approved a contract with the Cape Fear Rural Fire Department and adopted a resolution authorizing the change in service and fire district map.

The city is currently in the midst of engineering an expansion of its wastewater treatment plant, said city engineer Paul Weeks. He introduced the long-term plan as a way to bolster the city’s application for $20 million in state funding for the project.

If the funding is approved, city staff may apply for another $40 million for the expansion, bringing the total to $60 million, Weeks said. The funding is available at a 0.2% interest rate, which would add almost no additional debt to the budget.

“I think we need to do everything we can do to secure this funding,” said City Manager Hal Hegwer, citing a similar $3 million loan from the state that the city just received for sewer rehabilitation in East Sanford.

Water and wastewater rehabilitation was a major topic of discussion at the city council’s retreat in February, when Public Works Director Victor Czar spoke about the need to rehabilitate aging infrastructure to support future development projects.

Council member Charles Taylor picked up that conversation Tuesday, asking whether the city’s 10-year plan addressed the expansion or movement of lift stations, which help pump water uphill. One of the ways the city can prepare for future growth is by developing lift stations with higher capacity and the ability to pump water further, Taylor said.

“I think that’s gonna be a key factor,” he said. “I can see that being a parameter by which we start putting labels on the areas for growth.”

Weeks said city staff plan to continue development of an online tool that will help them calculate the cost of improvements to the system based on location.

“We expect in 6-9 months to have that fleshed out, to where we can sit down and decide about these lift stations, say ‘OK, what do we need to do, where should they be based on where we think (the system will) grow,’ ” Weeks said. “Once we know that, we can determine the size, and once we know that, we can determine cost, which can go into our capital improvement plan.”

Mayor Chet Mann said the 10-year plan will be a map for future development.

“We’ve got this massive resource asset in our wastewater (system), but if we don’t have the infrastructure to handle future growth, it’s like having an incredible stereo and tiny little speakers,” Mann said.

He added that the city will likely continue to see rezoning requests like the ones discussed at Tuesday’s meeting in the months ahead.

“We need to be prepared and get our infrastructure system updated,” Mann said. “We’re gonna be ahead of that growth curve and be able to accommodate it so much better — so we can shape and control that growth and we can have something to be proud of.”