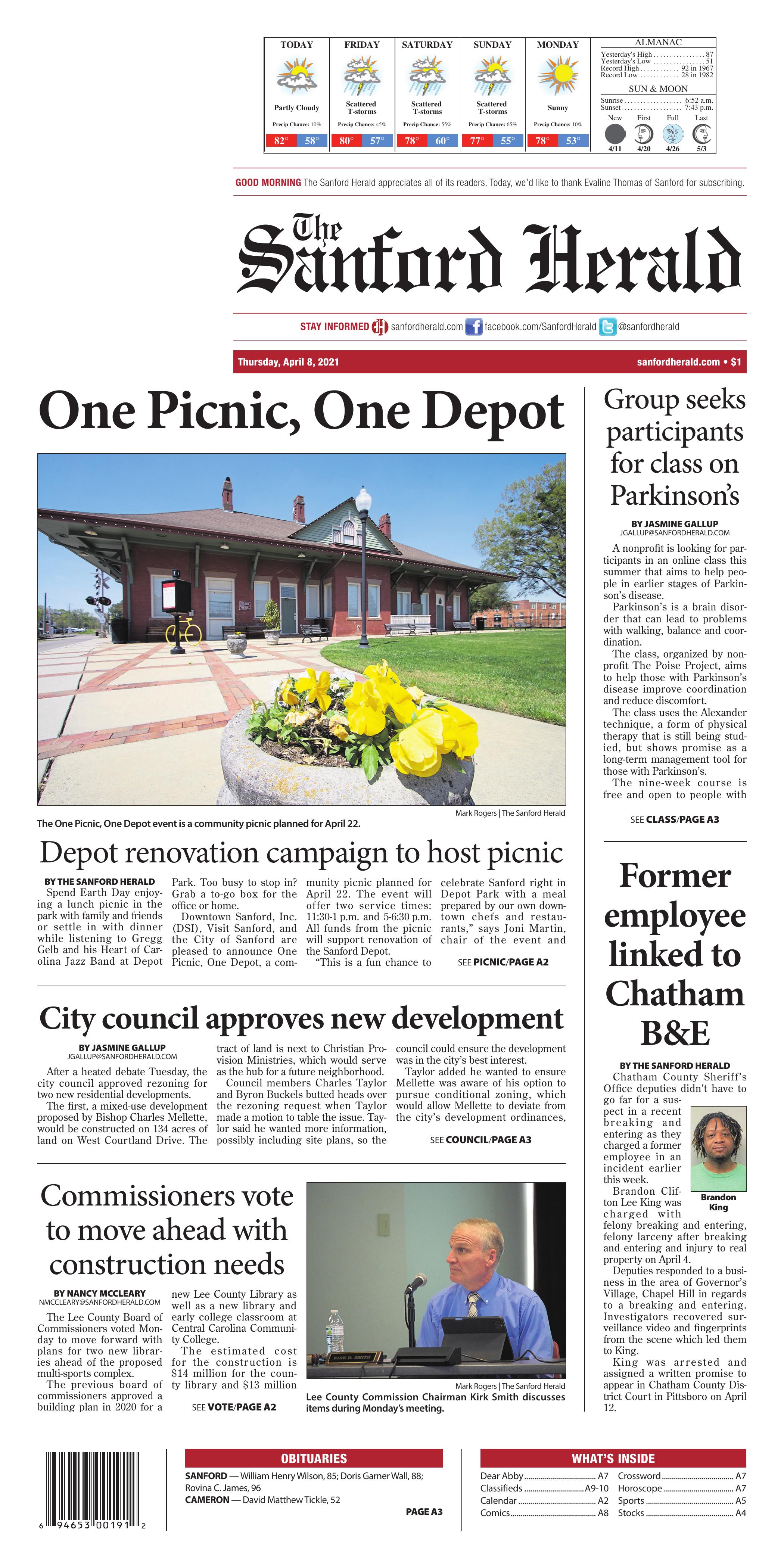 The One Picnic, One Depot event is a community picnic planned for April 22.

Music will echo through downtown Sanford on April 22 as diners enjoy Earth Day as part of the One Picnic, One Depot celebration.

A host of events are on tap for the Sanford Depot this spring and summer.

Spend Earth Day enjoying a lunch picnic in the park with family and friends or settle in with dinner while listening to Gregg Gelb and his Heart of Carolina Jazz Band at Depot Park. Too busy to stop in? Grab a to-go box for the office or home.

Downtown Sanford, Inc. (DSI), Visit Sanford, and the City of Sanford are pleased to announce One Picnic, One Depot, a community picnic planned for April 22. The event will offer two service times: 11:30-1 p.m. and 5-6:30 p.m. All funds from the picnic will support renovation of the Sanford Depot.

“This is a fun chance to celebrate Sanford right in Depot Park with a meal prepared by our own downtown chefs and restaurants,” says Joni Martin, chair of the event and Director at Progressive Contracting Co. “Together, we can return the Depot to its rightful position of importance in the heart of Downtown right where it began.”

One Picnic, One Depot will be the second event for a capital campaign to raise funds to renovate the historic Depot Building. The goal of the campaign is to turn the building into the home of a state-of-the-art visitor center and provide offices for Visit Sanford’s Tourism Development Authority and Downtown Sanford, Inc (DSI).

“We are excited to add to our One Depot events with a picnic this spring,” DSI Executive Director Kelli Laudate said. “We hope the event will encourage the community to help breathe new life into this historic building.”

Seven local downtown chefs are collaborating on a specially prepared seasonal menu. Chef Greg Hamm, owner of Café 121 and Libations 139, took the lead in organizing a collaborative meal to highlight the best of each participating restaurant. The lunch and supper will be family friendly. Tickets are $20 for lunch and $25 for supper with the option of adding wine to your supper for $45.

“The Depot has a great history of welcoming visitors to the area, and the Sanford TDA is excited to be a part of a project that restores its use as a visitor’s center. We will be able to support our community, and the region, with visitor services and resources once the renovation is complete,” Sanford TDA Executive Director Wendy Bryan said.

All participants are asked to adhere to social distancing.

To purchase tickets to One Picnic, One Depot, please contact Kelli Laudate at 919-718-4659 x1400, email kplaudate@downtownsanford.com, or visit www.friendsofsanford.com/events.

The first, a mixed-use development proposed by Bishop Charles Mellette, would be constructed on 134 acres of land on West Courtland Drive. The tract of land is next to Christian Provision Ministries, which would serve as the hub for a future neighborhood.

Council members Charles Taylor and Byron Buckels butted heads over the rezoning request when Taylor made a motion to table the issue. Taylor said he wanted more information, possibly including site plans, so the council could ensure the development was in the city’s best interest.

Taylor added he wanted to ensure Mellette was aware of his option to pursue conditional zoning, which would allow Mellette to deviate from the city’s development ordinances, but also give the city council more oversight of the development.

Mellette’s rezoning request, from R-20 to R-6, was general use, so no site plans were required. The change allows the development of a higher-density neighborhood that could include townhouses, duplexes and apartments instead of just single-family homes.

Buckels argued that there was no reason to postpone a ruling on the request when Mellette had submitted all the materials required of him.

Mellette also spoke, saying that after 31 years in the community, the city council should trust that Christian Provision Ministries will develop the land responsibly.

“We have over $4 million invested in the property that we currently have. We have been good stewards,” Mellette said. “We’ve honored all of our commitments, paid all of our creditors and our track record shows that we’re capable of making decisions that are in the best interests of (our congregation).”

The city council ultimately approved the rezoning request 5-1, with Taylor voting in opposition.

Similar debate arose over a request by Brandon Harrington, of Harrington Properties, to rezone 5.4 acres of land at the intersection of Bragg and South Seventh streets. The land will be home to small neighborhood consisting of 10 duplexes and two detached, single-family homes.

One point of contention was the developer’s inability to retrofit two city streets, Barnes Street and Ray Avenue, with curb and gutter, as is usually required. The city council approved rezoning 5-1, with council member Sam Gaskins voting against.

The debate on development again arose this week amid a recent increase in proposals for new neighborhoods, which has pushed the city council to move forward with its longtime goal of revising the laws governing residential development.

Over the past few years, the city council has approved many new projects through conditional zoning, a process that allows the council to have more oversight of land development. However, conditional zoning also extends the administrative process for the government officials and developers, resulting in a pile of red tape.

The proposed changes to development standards would streamline the approval process for new developments while also allowing the city council to maintain control over what is built, according to Marshall Downey, director of the city’s Planning & Development Department,

Conditional zoning would be replaced with a process called “traditional neighborhood development,” which requires all developers to meet stricter neighborhood design standards. Developers would be required to install sidewalks, curbs and gutter; preserve existing trees; and include at least 15% green space.

• an amendment to the incentive package for new economic development Project Star, decreasing the amount of money the city is expected to pay and increasing the number of jobs expected to be created from 316 to 325; and

The Lee County Board of Commissioners voted Monday to move forward with plans for two new libraries ahead of the proposed multi-sports complex.

The previous board of commissioners approved a building plan in 2020 for a new Lee County Library as well as a new library and early college classroom at Central Carolina Community College.

The prior board voted to make the construction a priority over the proposed multi-sport athletic complex.

Lee County voters in 2020 approved a $25 million bond package to fund the park to be located at Broadway Road and U.S. 421 Bypass.

It will include fields that can be used for soccer and other sports and will be capable of hosting tournaments.

The county has secured options on both property parcels, County Manager John Crumpton said Monday. That will now be able to hire an engineer to do an analysis on the property.

Also Monday, the commissioners unanimously voted to have the school board to present specific information and documentation in its 2021-22 budget request

The motion arose from discussions between Crumpton and Commissioner Bill Carver, who raised the issue at a March meeting.

The Lee County Board of Education is being asked submit a year-to-date statement showing all sources of revenue and expenses by line-item including expenditure of COVID emergency funds; the proposed 2021-22 budget showing revenue and income from local, state and federal money; expected expenditures; a consolidated budget document; and a record showing how COVID-19 related federal ESSER II funds are to be spent until they expire in 2023.

“It makes a serious request for information that allows us to make a decision,” Carver said.

Crumpton agreed, saying the school board focuses primarily on “increases in local expenditures and funds.”

The request, he said, “is in keeping in line with the zero-based budgeting we have talked about.”

A nonprofit is looking for participants in an online class this summer that aims to help people in earlier stages of Parkinson’s disease.

Parkinson’s is a brain disorder that can lead to problems with walking, balance and coordination.

The class, organized by nonprofit The Poise Project, aims to help those with Parkinson’s disease improve coordination and reduce discomfort.

The class uses the Alexander technique, a form of physical therapy that is still being studied, but shows promise as a long-term management tool for those with Parkinson’s.

The nine-week course is free and open to people with Parkinson’s as well as their family, friends or caregivers. Participants in the class can also take part in a research study through the University of Idaho, according to The Poise Project.

The class runs Mondays and Thursdays from April 19-June 17.

For more information or to register, contact the instructor Jim Paisner at Jim.Pais ner@thepoiseproject.org or 978-764-7334. 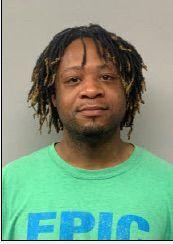 Chatham County Sheriff’s Office deputies didn’t have to go far for a suspect in a recent breaking and entering as they charged a former employee in an incident earlier this week.

Deputies responded to a business in the area of Governor’s Village, Chapel Hill in regards to a breaking and entering. Investigators recovered surveillance video and fingerprints from the scene which led them to King.

King was arrested and assigned a written promise to appear in Chatham County District Court in Pittsboro on April 12.