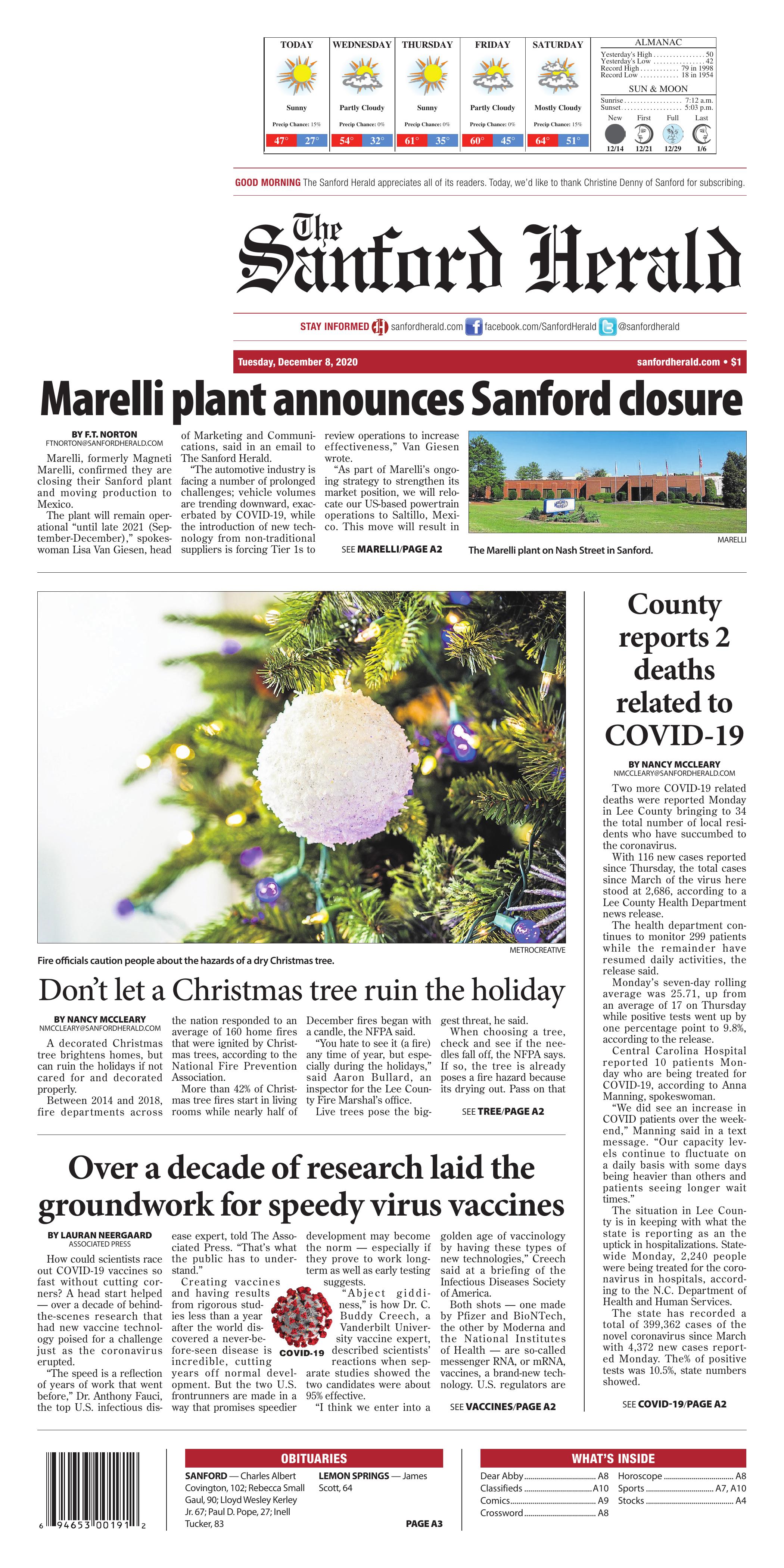 The Marelli plant on Nash Street in Sanford.

Marelli, formerly Magneti Marelli, confirmed they are closing their Sanford plant and moving production to Mexico.

The plant will remain operational “until late 2021 (September-December),” spokeswoman Lisa Van Giesen, head of Marketing and Communications, said in an email to The Sanford Herald.

“The automotive industry is facing a number of prolonged challenges; vehicle volumes are trending downward, exacerbated by COVID-19, while the introduction of new technology from non-traditional suppliers is forcing Tier 1s to review operations to increase effectiveness,” Van Giesen wrote.

“As part of Marelli’s ongoing strategy to strengthen its market position, we will relocate our US-based powertrain operations to Saltillo, Mexico. This move will result in improved service levels to our customers through measurable quality improvements, fixed expense reductions, lower labor costs and supply chain improvements.”

In 2019, after Magnetti Marelli was bought by Calsonic Kansei, a Japanese company, for $6.5, the company changed its name to just Marelli to “compete even more effectively on a global scale,” a news release states.

Van Giesen did not say if there were other planned plant closures elsewhere.

The closure was announced in an email to employees last week from Fabrizio Righetti, general manager of Powertrain for Marelli North Carolina.

Fabrizio said in the email shared with The Sanford Herald that beginning this month, the company will “move equipment and assembly lines, in a staggered fashion, from our plant in Sanford to fa new plant in the Ramos Arizpe area of Saltillo.”

The email said the plant’s foundry operations will be outsourced to a supplier.

“The move will allow us to restore business continuity while reducing service level risks,” Fabrizio said in the email to Sanford employees.

Fire officials caution people about the hazards of a dry Christmas tree.

A decorated Christmas tree brightens homes, but can ruin the holidays if not cared for and decorated properly.

Between 2014 and 2018, fire departments across the nation responded to an average of 160 home fires that were ignited by Christmas trees, according to the National Fire Prevention Association.

More than 42% of Christmas tree fires start in living rooms while nearly half of December fires began with a candle, the NFPA said.

“You hate to see it (a fire) any time of year, but especially during the holidays,” said Aaron Bullard, an inspector for the Lee County Fire Marshal’s office.

When choosing a tree, check and see if the needles fall off, the NFPA says. If so, the tree is already poses a fire hazard because its drying out. Pass on that one and find something fresher.

Once the tree is home, put it in a spot that’s away from heat sources, Bullard said.

The NFPA recommends placing the tree at least 3 feet away from heat sources and making sure it’s not blocking an exit.

“Don’t put it near a fireplace or other heat sources. If placed near a vent, make sure it’s closed or covered,” he said. “Heat can dry it out quicker.”

Don’t put candles near live trees and when using electrical lights, make sure they are U.L. approved and work properly.

Be aware that while lights won’t get hot, they can dry out a tree, Bullard said.

More than one in four home Christmas tree fires is caused by electrical problems, according to the NFPA.

The most important thing for live Christmas trees is keeping them watered, he said.

“You need to keep it watered and don’t let it dry out,” Bullard said. “I check the water in mine and put water in every day.”

When leaving home, unplug the lights and make sure fire sources, such as candles, have been extinguished, he said.

Keep an eye on pets to prevent them from chewing on electrical wires. Watch for curious cats who want to climb the tree and may pull it down, Bullard said.

Two more COVID-19 related deaths were reported Monday in Lee County bringing to 34 the total number of local residents who have succumbed to the coronavirus.

With 116 new cases reported since Thursday, the total cases since March of the virus here stood at 2,686, according to a Lee County Health Department news release.

The health department continues to monitor 299 patients while the remainder have resumed daily activities, the release said.

Monday’s seven-day rolling average was 25.71, up from an average of 17 on Thursday while positive tests went up by one percentage point to 9.8%, according to the release.

Central Carolina Hospital reported 10 patients Monday who are being treated for COVID-19, according to Anna Manning, spokeswoman.

“We did see an increase in COVID patients over the weekend,” Manning said in a text message. “Our capacity levels continue to fluctuate on a daily basis with some days being heavier than others and patients seeing longer wait times.”

The situation in Lee County is in keeping with what the state is reporting as an the uptick in hospitalizations. Statewide Monday, 2,240 people were being treated for the coronavirus in hospitals, according to the N.C. Department of Health and Human Services.

The state has recorded a total of 399,362 cases of the novel coronavirus since March with 4,372 new cases reported Monday. The% of positive tests was 10.5%, state numbers showed.

The virus has claimed the lives of 5,560 North Carolina residents, according to NCDHHS.