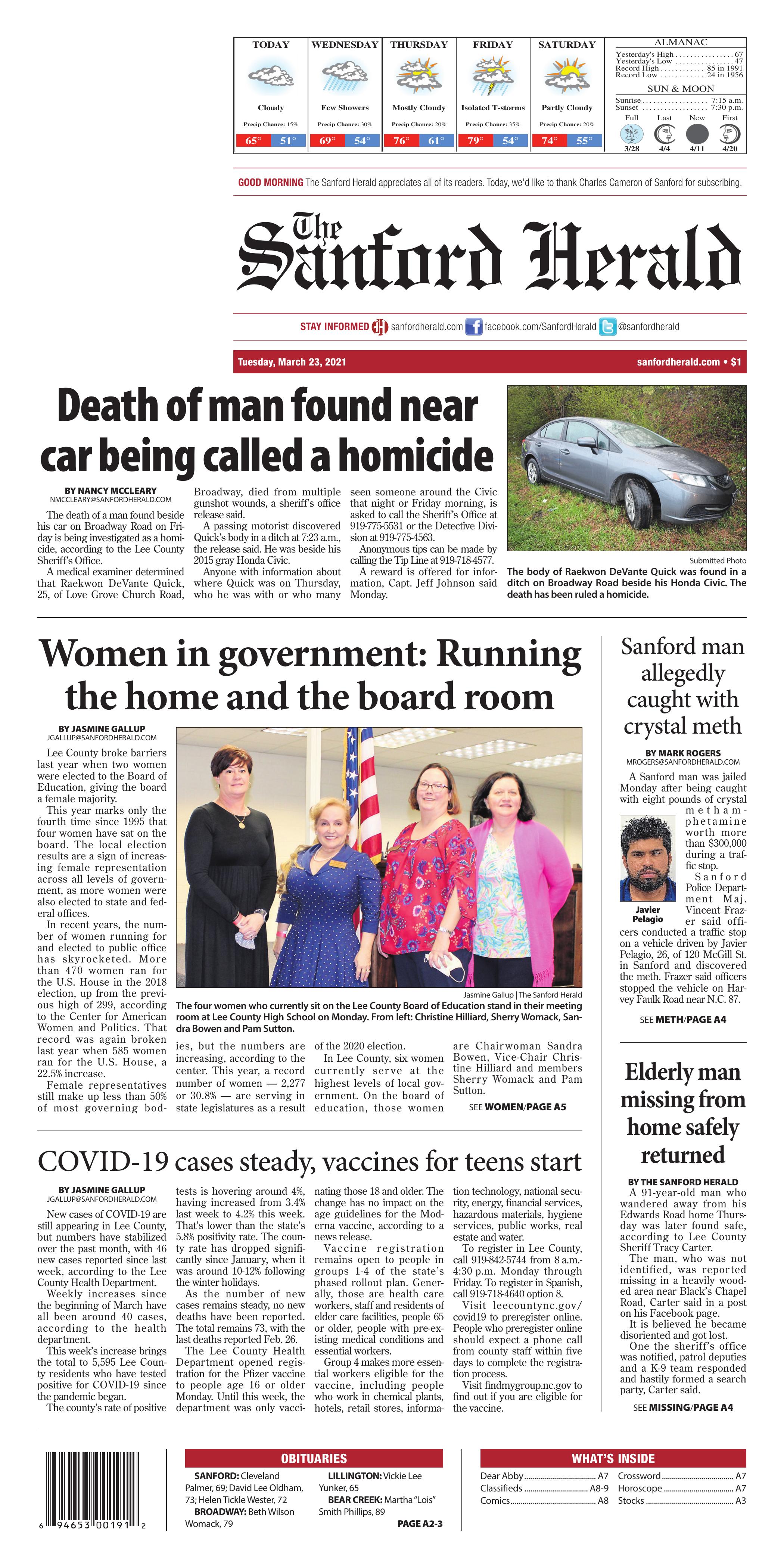 The body of Raekwon DeVante Quick was found in a ditch on Broadway Road beside his Honda Civic. The death has been ruled a homicide.

The death of a man found beside his car on Broadway Road on Friday is being investigated as a homicide, according to the Lee County Sheriff’s Office.

A passing motorist discovered Quick’s body in a ditch at 7:23 a.m., the release said. He was beside his 2015 gray Honda Civic.

Anyone with information about where Quick was on Thursday, who he was with or who many seen someone around the Civic that night or Friday morning, is asked to call the Sheriff’s Office at 919-775-5531 or the Detective Division at 919-775-4563.

News
Women in government: running the home and the board room
jgallup / Jasmine Gallup | The Sanford Herald

The four women who currently sit on the Lee County Board of Education stand in their meeting room at Lee County High School on Monday. From left: Christine Hilliard, Sherry Womack, Sandra Bowen and Pam Sutton.

Lee County broke barriers last year when two women were elected to the Board of Education, giving the board a female majority.

This year marks only the fourth time since 1995 that four women have sat on the board. The local election results are a sign of increasing female representation across all levels of government, as more women were also elected to state and federal offices.

Female representatives still make up less than 50% of most governing bodies, but the numbers are increasing, according to the center. This year, a record number of women — 2,277 or 30.8% — are serving in state legislatures as a result of the 2020 election.

In Lee County, six women currently serve at the highest levels of local government. On the board of education, those women are Chairwoman Sandra Bowen, Vice-Chair Christine Hilliard and members Sherry Womack and Pam Sutton.

City council member Rebecca Wyhof Salmon has served the city for several years, formerly acting as mayor pro tem, while county commissioner and Vice-Chair Arianna Lavallee is new to public service, having been elected in 2018.

One of the biggest challenges for women in politics is perception, several school board members said. Although gender is becoming less of a barrier, some women may still be reluctant to get involved.

“Many women are hesitant to enter into public office because they know their personal lives will be on display,” Womack said.

Sutton agreed, saying she was initially hesitant to run for office because, “any woman who is campaigning for public office opens herself up to public scrutiny,” she said. “This can be difficult for children and other family members because that scrutiny extends to them as well, which at times can be unfair.”

There are often different expectations for women compared to men, Sutton said.

“For example, if a woman expresses herself loudly, she is considered aggressive or ‘overly emotional,’ whereas a man can do this and he is considered ‘passionate,’ ” she said. “Women are always expected to work at least twice as hard as their male colleagues to prove themselves, to gain respect, and to be taken seriously.”

Still, there are fewer barriers facing women today than in the past. For Hilliard, gender has never been factor in her political goals, she said.

“I have not considered my gender as an impediment towards my aspirations,” she said. “If anything, my maternal instincts and the fact that some people overlooked me during the campaign and did not take me seriously only helped me.

In the early history of politics, one of the biggest roadblocks to women was their obligation to stay home and raise children.

“Today, family men share much of the child rearing duties which allows women to serve in elected office more than in the past,” Womack said.

Bowen, who has three children and also works full-time, said her family ignites her passion for politics. Over the years, Bowen has been constantly questioned as to how she balances public service with family life and career.

“The assumption that a woman cannot do both is one that I hope I challenge every single day,” Bowen said. “I am a strong woman, with a supportive family, and without them I would never be able to achieve what I have.

New cases of COVID-19 are still appearing in Lee County, but numbers have stabilized over the past month, with 46 new cases reported since last week, according to the Lee County Health Department.

Weekly increases since the beginning of March have all been around 40 cases, according to the health department.

This week’s increase brings the total to 5,595 Lee County residents who have tested positive for COVID-19 since the pandemic began.

The county’s rate of positive tests is hovering around 4%, having increased from 3.4% last week to 4.2% this week. That’s lower than the state’s 5.8% positivity rate. The county rate has dropped significantly since January, when it was around 10-12% following the winter holidays.

As the number of new cases remains steady, no new deaths have been reported. The total remains 73, with the last deaths reported Feb. 26.

The Lee County Health Department opened registration for the Pfizer vaccine to people age 16 or older Monday. Until this week, the department was only vaccinating those 18 and older. The change has no impact on the age guidelines for the Moderna vaccine, according to a news release.

Visit findmygroup.nc.gov to find out if you are eligible for the vaccine.

A Sanford man was jailed Monday after being caught with eight pounds of crystal methamphetamine worth more than $300,000 during a traffic stop.

Sanford Narcotic agents charged Pelagio with two counts of trafficking methamphetamine, one county of manufacture/sell/deliver/possess a controlled substance within 1,000 feet of a school and one count of possession of drug paraphernalia.

Pelagio was processed and transported to the Lee County Jail where he was placed under a $100,000 secured bond.

A 91-year-old man who wandered away from his Edwards Road home Thursday was later found safe, according to Lee County Sheriff Tracy Carter.

The man, who was not identified, was reported missing in a heavily wooded area near Black’s Chapel Road, Carter said in a post on his Facebook page.

It is believed he became disoriented and got lost.

One the sheriff’s office was notified, patrol deputies and a K-9 team responded and hastily formed a search party, Carter said.

About three hours later, the man was found in “an extremely thick area of woods and briars near a stream,” Carter wrote.

“It was insane how thick the briars were,” he said. “We actually had to wade knee-deep through the stream about ¼ mile to make our way out.”

The man was returned home after being evaluated by medical personnel, according to Carter.