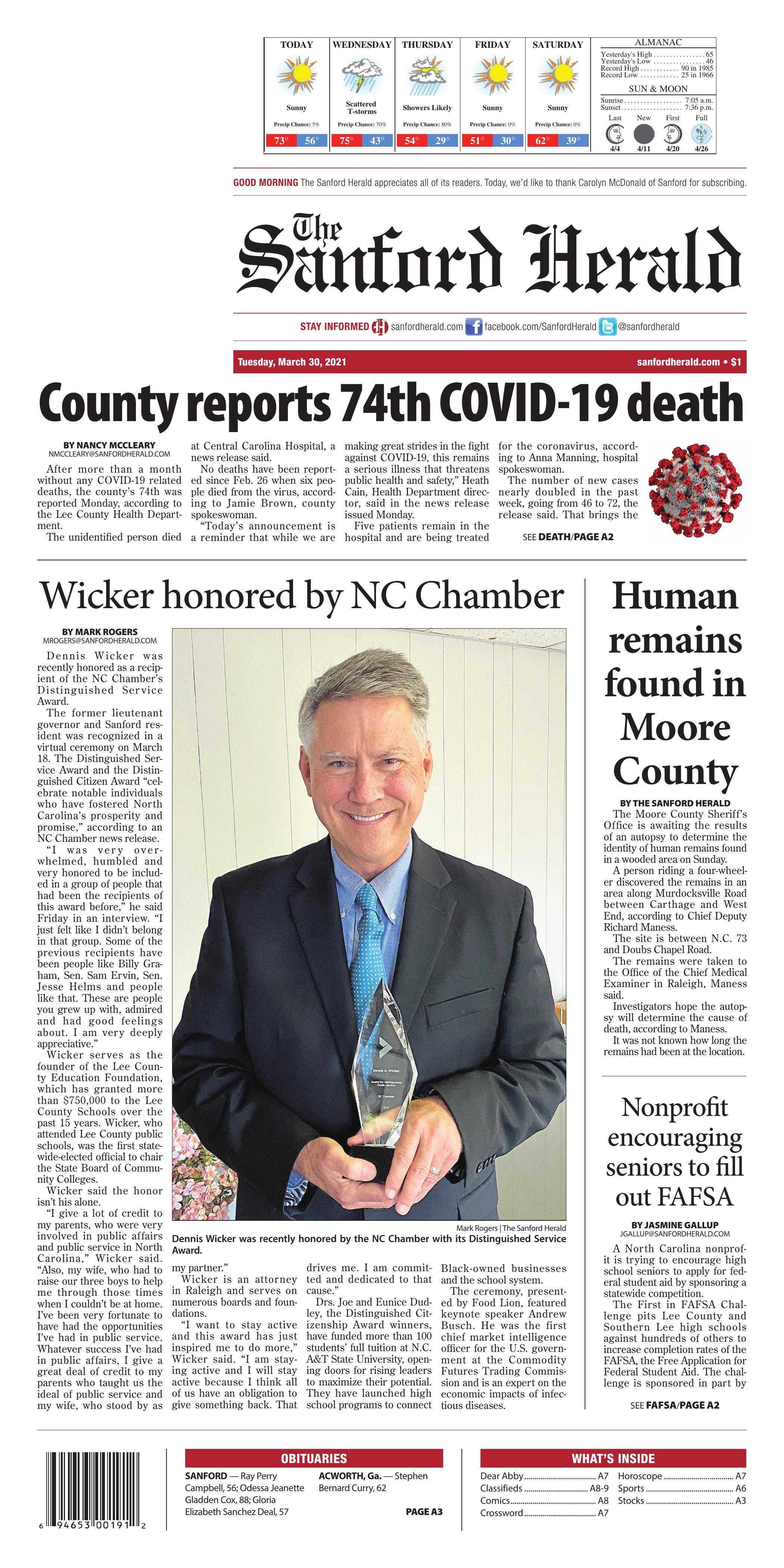 After more than a month without any COVID-19 related deaths, the county’s 74th was reported Monday, according to the Lee County Health Department.

No deaths have been reported since Feb. 26 when six people died from the virus, according to Jamie Brown, county spokeswoman.

“Today’s announcement is a reminder that while we are making great strides in the fight against COVID-19, this remains a serious illness that threatens public health and safety,” Heath Cain, Health Department director, said in the news release issued Monday.

Five patients remain in the hospital and are being treated for the coronavirus, according to Anna Manning, hospital spokeswoman.

The number of new cases nearly doubled in the past week, going from 46 to 72, the release said. That brings the total since the first case reported in March 2020 to 5,567.

The Health Department continues to provide vaccinations against the virus at the Dennis A. Wicker Civic Center.

“Vaccinations remain the strongest defense against the virus and everyone who is eligible is strongly encouraged to get vaccinated,” the news release said.

Registration is now open to all those 16 and older. Most will receive the Moderna or Pfizer vaccines. However, the Pfizer vaccine is the only one available to 16- and 17-year-olds, according to county guidelines.

Pre-registration forms are available online at leecountync.gov/covid19. Once the form has been completed, a member of the county staff will make contact within five business days and schedule an appointment.

Dennis Wicker was recently honored by the NC Chamber with its Distinguished Service Award.

Dennis Wicker was recently honored as a recipient of the NC Chamber’s Distinguished Service Award.

The former lieutenant governor and Sanford resident was recognized in a virtual ceremony on March 18. The Distinguished Service Award and the Distinguished Citizen Award “celebrate notable individuals who have fostered North Carolina’s prosperity and promise,” according to an NC Chamber news release.

“I was very overwhelmed, humbled and very honored to be included in a group of people that had been the recipients of this award before,” he said Friday in an interview. “I just felt like I didn’t belong in that group. Some of the previous recipients have been people like Billy Graham, Sen. Sam Ervin, Sen. Jesse Helms and people like that. These are people you grew up with, admired and had good feelings about. I am very deeply appreciative.”

Wicker serves as the founder of the Lee County Education Foundation, which has granted more than $750,000 to the Lee County Schools over the past 15 years. Wicker, who attended Lee County public schools, was the first statewide-elected official to chair the State Board of Community Colleges.

Wicker is an attorney in Raleigh and serves on numerous boards and foundations.

“I want to stay active and this award has just inspired me to do more,” Wicker said. “I am staying active and I will stay active because I think all of us have an obligation to give something back. That drives me. I am committed and dedicated to that cause.”

The ceremony, presented by Food Lion, featured keynote speaker Andrew Busch. He was the first chief market intelligence officer for the U.S. government at the Commodity Futures Trading Commission and is an expert on the economic impacts of infectious diseases.

The Moore County Sheriff’s Office is awaiting the results of an autopsy to determine the identity of human remains found in a wooded area on Sunday.

A person riding a four-wheeler discovered the remains in an area along Murdocksville Road between Carthage and West End, according to Chief Deputy Richard Maness.

The site is between N.C. 73 and Doubs Chapel Road.

The remains were taken to the Office of the Chief Medical Examiner in Raleigh, Maness said.

Investigators hope the autopsy will determine the cause of death, according to Maness.

It was not known how long the remains had been at the location.

A North Carolina nonprofit is trying to encourage high school seniors to apply for federal student aid by sponsoring a statewide competition.

The First in FAFSA Challenge pits Lee County and Southern Lee high schools against hundreds of others to increase completion rates of the FAFSA, the Free Application for Federal Student Aid. The challenge is sponsored in part by myFutureNC, a nonprofit aiming to close the education gap.

In 2020, students “left an estimated $107 million on the table” by not filling out the FAFSA, according to a news release.

“We know that students who complete the FAFSA are far more likely to enroll in higher education. We also know that students with a two or four year degree are going to double and even triple their life-time earnings,” N.C. Superintendent of Public Instruction Catherine Truitt said in a news release.

“Because of this pandemic, the students in Class of 2020 and 2021 are facing challenges no other students have had to deal with before. But we want to make sure they still have the opportunity to continue their education and accomplish their dreams. Completing the FAFSA is a pivotal first step in helping them do that.”

Visit www.myfu turenc.org/first-in-faf sa for a step-by-step guide to completing the FAFSA and other resources.