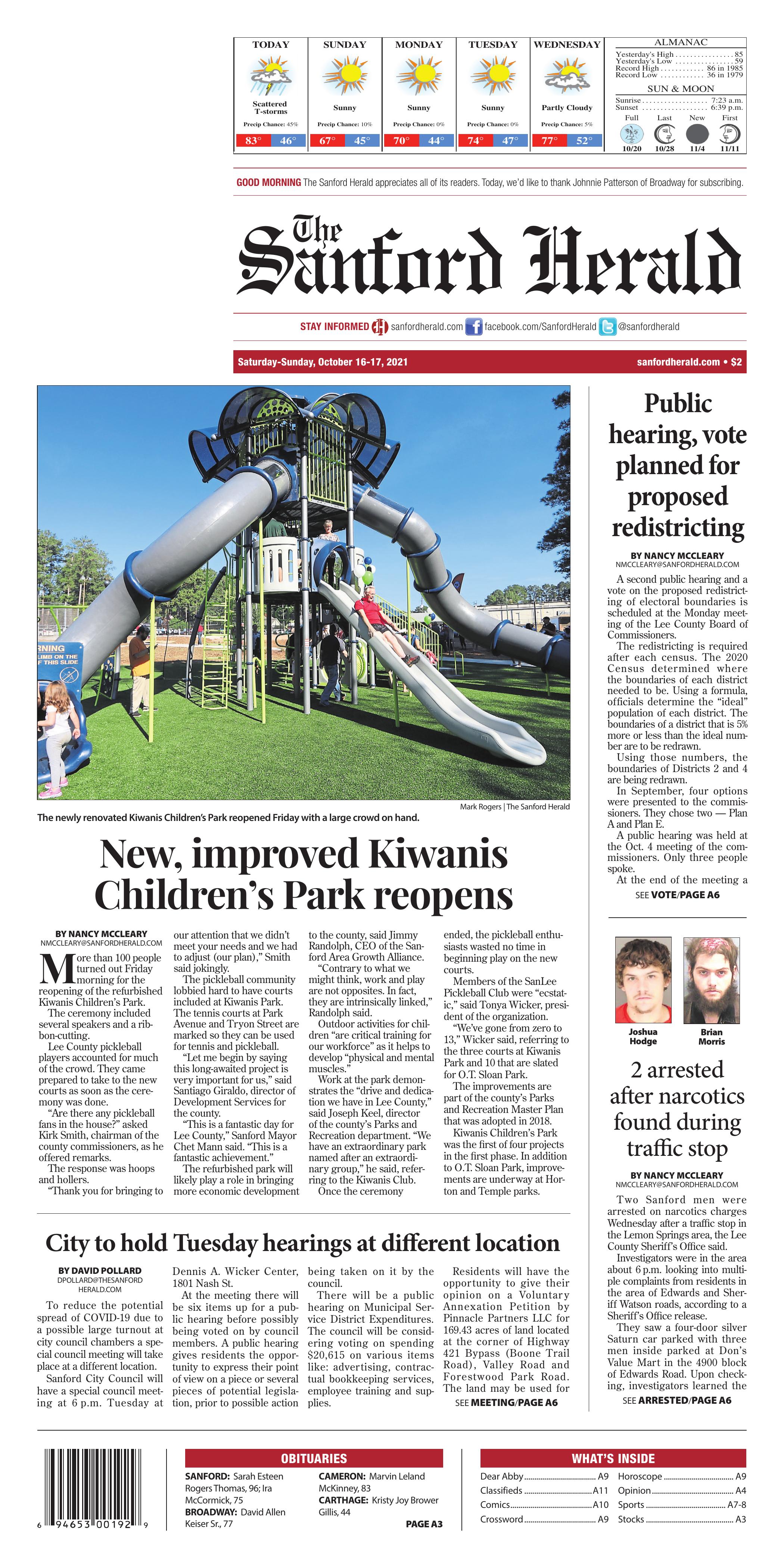 The pickleball courts at Kiwanis Children's Park were full of players after the ribbon cutting.

A large crowd was on hand for the dedication ceremony of the renovated Kiwanis Children's Park.

More than 100 people turned out Friday morning for the reopening of the refurbished Kiwanis Children’s Park.

The ceremony included several speakers and a ribbon-cutting.

Lee County pickleball players accounted for much of the crowd. They came prepared to take to the new courts as soon as the ceremony was done.

“Are there any pickleball fans in the house?” asked Kirk Smith, chairman of the county commissioners, as he offered remarks.

The response was hoops and hollers.

“Thank you for bringing to our attention that we didn’t meet your needs and we had to adjust (our plan),” Smith said jokingly.

The pickleball community lobbied hard to have courts included at Kiwanis Park. The tennis courts at Park Avenue and Tryon Street are marked so they can be used for tennis and pickleball.

“Let me begin by saying this long-awaited project is very important for us,” said Santiago Giraldo, director of Development Services for the county.

The refurbished park will likely play a role in bringing more economic development to the county, said Jimmy Randolph, CEO of the Sanford Area Growth Alliance.

“Contrary to what we might think, work and play are not opposites. In fact, they are intrinsically linked,” Randolph said.

Outdoor activities for children “are critical training for our workforce” as it helps to develop “physical and mental muscles.”

Work at the park demonstrates the “drive and dedication we have in Lee County,” said Joseph Keel, director of the county’s Parks and Recreation department. “We have an extraordinary park named after an extraordinary group,” he said, referring to the Kiwanis Club.

Once the ceremony ended, the pickleball enthusiasts wasted no time in beginning play on the new courts.

Members of the SanLee Pickleball Club were “ecstatic,” said Tonya Wicker, president of the organization.

“We’ve gone from zero to 13,” Wicker said, referring to the three courts at Kiwanis Park and 10 that are slated for O.T. Sloan Park.

The improvements are part of the county’s Parks and Recreation Master Plan that was adopted in 2018.

Kiwanis Children’s Park was the first of four projects in the first phase. In addition to O.T. Sloan Park, improvements are underway at Horton and Temple parks.

To reduce the potential spread of COVID-19 due to a possible large turnout at city council chambers a special council meeting will take place at a different location.

Sanford City Council will have a special council meeting at 6 p.m. Tuesday at Dennis A. Wicker Center, 1801 Nash St.

At the meeting there will be six items up for a public hearing before possibly being voted on by council members. A public hearing gives residents the opportunity to express their point of view on a piece or several pieces of potential legislation, prior to possible action being taken on it by the council.

There will be a public hearing on Municipal Service District Expenditures. The council will be considering voting on spending $20,615 on various items like: advertising, contractual bookkeeping services, employee training and supplies.

Residents will have the opportunity to give their opinion on a Voluntary Annexation Petition by Pinnacle Partners LLC for 169.43 acres of land located at the corner of Highway 421 Bypass (Boone Trail Road), Valley Road and Forestwood Park Road. The land may be used for economic development purposes.

After the public hearing is complete the council may vote on an ordinance regarding the annexation.

There will be another public hearing regarding Pinnacle Partners LLC and the rezoning of three tracts of land totaling 168 acres. The public hearing will be done jointly with the city’s Planning Board.

The hearing involves the proposed rezoning of the 168 acres of land from Residential Restricted to the Brookshire Conditional Zoning District to allow for the development of a residential subdivision with two commercial areas.

The rezoning request would be contingent upon the annexation of the property is approved by the council.

A public hearing may possibly take place regarding an application by Katherine Cutshall, who represents the property owner, to rezone a piece of property. According to the zoning request, she would like to rezone a .13 acre tract of land addressed as 110 Park Ave. from General Commercial to Residential Mixed.

The address was formerly used for business, but the owner wants to renovate the property back into a single-family home.

Pending a positive public hearing, the city council will vote on the rezoning request.

After a public hearing the city council will possibly consider a rezoning application by Shontz-Settle, LLC to rezone a 4.56 acre portion of a 7.46-acre tract of land addressed as 100 and 101 Animal Avenue from Light Industrial to General Commercial. According to the zoning application, the owner does not have immediate plans for the property but the rezoning would help with the future marketing and development of the property.

Following a public hearing on a zoning application made by MAD M&R, LLC, the council may possibly vote on the rezoning of three adjoining tracts of land totaling 98.4 acres. The acreage has frontage on Broadway Road (SR 1579) and Kelly Drive (SR 1521) the owner is requesting the property be rezoned from Residential Single-family, Residential Mixed and Light Industrial to the Marelli Conditional Zoning District to allow for the development of a residential subdivision with a commercial business area.

A second public hearing and a vote on the proposed redistricting of electoral boundaries is scheduled at the Monday meeting of the Lee County Board of Commissioners.

Using those numbers, the boundaries of Districts 2 and 4 are being redrawn.

In September, four options were presented to the commissioners. They chose two — Plan A and Plan E.

A public hearing was held at the Oct. 4 meeting of the commissioners. Only three people spoke.

At the end of the meeting a third plan, Plan F, was proposed by Commissioner Andre Knecht.

The board then asked to have a resolution drawn up to vote on Plan F, but a public hearing on the proposal is scheduled before a vote is taken.

Plan F has been available to residents online at the county’s website, the Lee County Library and the Board of Elections office.

Also Monday, the commissioners will consider a request from the U.S. Motto Action Committee to begin work on the installation of the “In God We Trust” motto.

Rick Lanier, a spokesman for the group, appeared before the board in January, asking to have the motto installed on the new county courthouse, the county administration building and the commissioners’ meeting room inside. The installations would be provided at no cost for the county, according to Lanier’s presentation.

The board will also be provided with updates on several construction projects underway and on the county’s COVID-19 status. 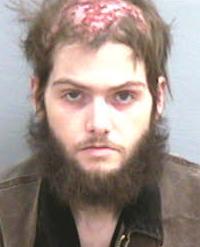 Investigators were in the area about 6 p.m. looking into multiple complaints from residents in the area of Edwards and Sheriff Watson roads, according to a Sheriff’s Office release.

They saw a four-door silver Saturn car parked with three men inside parked at Don’s Value Mart in the 4900 block of Edwards Road. Upon checking, investigators learned the registration had expired or been canceled, the release said.

Investigators stopped the car at Edwards and Sheriff Watson roads, near the Fountain Wood mobile home park, the release said.

During the stop, they discovered the driver, identified as Joshua Perry Hodge, 20, of the 200 block of Fountain Wood Drive, had 16 10-milligram oxycodone pills packaged in a white plastic bag, the release said.

Additional narcotics were found in a prescription-type pill bottle, according to the Sheriff’s Office.

“Hodge had tried to discard the plastic bag by throwing it on the ground and the pill bottle (he) had hidden in his groin area,” the release said.

A passenger, Bryan Anthony Morris, no age given, of Sanford, was found with 20 10-milligram pills of oxycodone. He also had 15 doses of oxycodone/acetaminophen pills that had been prescribed for Morris; they were in a bottle with his name on it, the release said.

Hodge is charged with simple possession of a controlled substance and misdemeanor possession of drug paraphernalia. Bail was set at $6,000.

Morris is charged with trafficking opium or heroin, possession of a controlled substance and misdemeanor possession of drug paraphernalia. Bail was set at $250,000.

Click and hold your mouse button on the page to select the area you wish to save or print. You can click and drag the clipping box to move it or click and drag in the bottom right corner to resize it. When you're happy with your selection, click the checkmark icon next to the clipping area to continue.