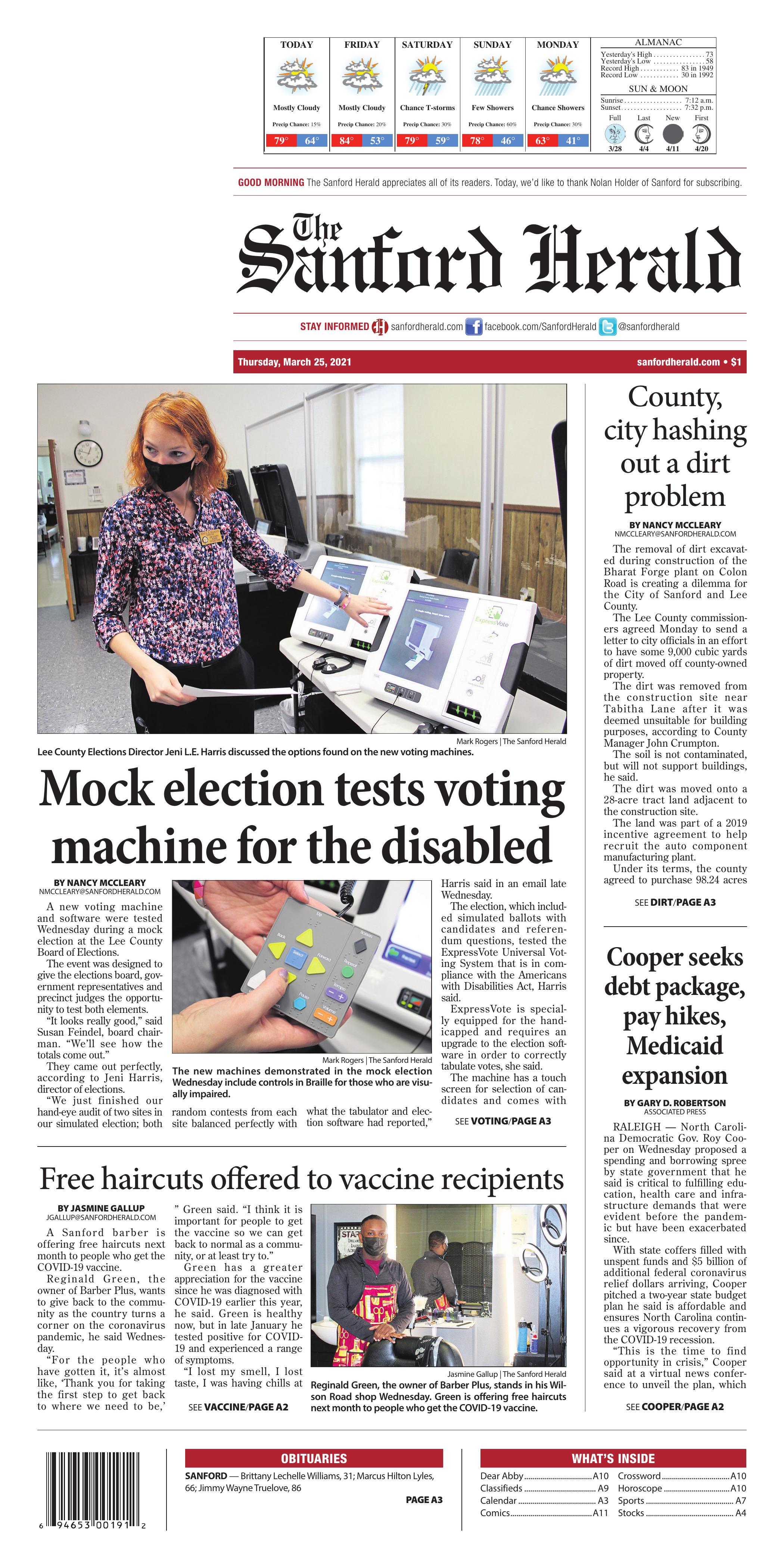 The new machines demonstrated in the mock election Wednesday include controls in Braille for those who are visually impaired.

Cleo Bryant, a judge for Precinct A-2, speaks about the ease of use for the voting machines.

Sample printouts were scanned to determine mock election results as new voting machines were tested in Lee County on Wednesday.

Election officials and members of the public were on hand for the mock election using new equipment in Lee County on Wednesday.

A new voting machine and software were tested Wednesday during a mock election at the Lee County Board of Elections.

The event was designed to give the elections board, government representatives and precinct judges the opportunity to test both elements.

“It looks really good,” said Susan Feindel, board chairman. “We’ll see how the totals come out.”

They came out perfectly, according to Jeni Harris, director of elections.

“We just finished our hand-eye audit of two sites in our simulated election; both random contests from each site balanced perfectly with what the tabulator and election software had reported,” Harris said in an email late Wednesday.

The election, which included simulated ballots with candidates and referendum questions, tested the ExpressVote Universal Voting System that is in compliance with the Americans with Disabilities Act, Harris said.

ExpressVote is specially equipped for the handicapped and requires an upgrade to the election software in order to correctly tabulate votes, she said.

The machine has a touch screen for selection of candidates and comes with headphones to allow each race on the ballot to be read aloud for those who are hearing or visually impaired.

The ExpressVote has a device that looks like a video game controller that’s attached with velcro and its instructions are in Braille, allowing the visually challenged to use the device to help make choices.

The screens can be darkened if the voter wants to ensure no one is watching the marking of the ballot.

Once the final selections have been made, a sheet of paper is printed out showing how the votes were cast.

Harris has proposed purchasing 14 of the ExpressVotes with one being placed at each precinct, two one-stop voting sites and two more to use as backups.

The ExpressVotes are $3,300 each, but will be paid for with grant money, Harris has said.

“I think this is a very easy process,” said Cleo Bryant, a judge for Precinct A-2 at J. Glenn Edwards Elementary School on Cemetery Road. “This is so much easier than the previous ones. It gives us time to help other voters who come in. It should’ve been around 20 years ago. I love it.”

“Anything to help the handicapped,” Lovick said. “They’re doing a good job using the grant money.”

Once the state board has given the OK, the request to invest in the ExpressVote machine and software will be presented to the Lee County Board of Commissioners for final approval, Harris said.

Reginald Green, the owner of Barber Plus, stands in his Wilson Road shop Wednesday. Green is offering free haircuts next month to people who get the COVID-19 vaccine.

A Sanford barber is offering free haircuts next month to people who get the COVID-19 vaccine.

Reginald Green, the owner of Barber Plus, wants to give back to the community as the country turns a corner on the coronavirus pandemic, he said Wednesday.

“For the people who have gotten it, it’s almost like, ‘Thank you for taking the first step to get back to where we need to be,’ ” Green said. “I think it is important for people to get the vaccine so we can get back to normal as a community, or at least try to.”

Green has a greater appreciation for the vaccine since he was diagnosed with COVID-19 earlier this year, he said. Green is healthy now, but in late January he tested positive for COVID-19 and experienced a range of symptoms.

“I lost my smell, I lost taste, I was having chills at night,” he said.

It was a scary experience, he added.

Green said he is a little nervous about getting the vaccine because of possible side effects, but he’s going ahead with the first shot April 11.

“I’m super excited, I can’t wait,” he said. “I’ve had people already come in who’ve had the first shot, and there’s a huge difference between people who have the shot and people who don’t. It’s almost like a protective bubble over them.”

Green will be offering free haircuts April 12-15, he said. People should make an appointment online and bring in their vaccination card.

The removal of dirt excavated during construction of the Bharat Forge plant on Colon Road is creating a dilemma for the City of Sanford and Lee County.

The Lee County commissioners agreed Monday to send a letter to city officials in an effort to have some 9,000 cubic yards of dirt moved off county-owned property.

The dirt was removed from the construction site near Tabitha Lane after it was deemed unsuitable for building purposes, according to County Manager John Crumpton.

The soil is not contaminated, but will not support buildings, he said.

The dirt was moved onto a 28-acre tract land adjacent to the construction site.

The land was part of a 2019 incentive agreement to help recruit the auto component manufacturing plant.

Under its terms, the county agreed to purchase 98.24 acres on Colon Road at a cost of $1.152 million with 70 acres to be used for construction of the Bharat Forge plant.

The dirt was removed on the site as part of the preparation process and piled onto the county land. County officials are now trying to hasten the removal process, Crumpton said.

He sought approval from the commissioners to send a letter to City Manager Hal Hegwer suggesting the city consider leasing the land from the county until the dirt is removed.

In 2019, the county purchased 98.24 acres on Colon Road at Tabitha Lane at a cost of $1.152 million with 70 acres to be used for the auto component manufacturing plant.

As part of an incentive agreement, the county paid for the land while the city agreed to prepare the building site and install the infrastructure.

Thus, the dirt was moved onto the county’s land during site preparations.

The county is looking to have the dirt removed so the remaining 28 acres can be marketed.

The county is proposing that the city lease the land until it has been cleaned up.

“We’re attempting to try to get the city to move a little quicker on getting plans to excavate the dirt on-site that came from Bharat Forge,” Crumpton said.

“We’re just trying to get the city to move forward and remove the dirt.”

The soil won’t necessarily have to be physically removed, Crumpton said, and could be scattered in the wooded area on the land.

The commissioners gave Crumpton the OK and asked only that any negotiations involved be brought to the board for approval.