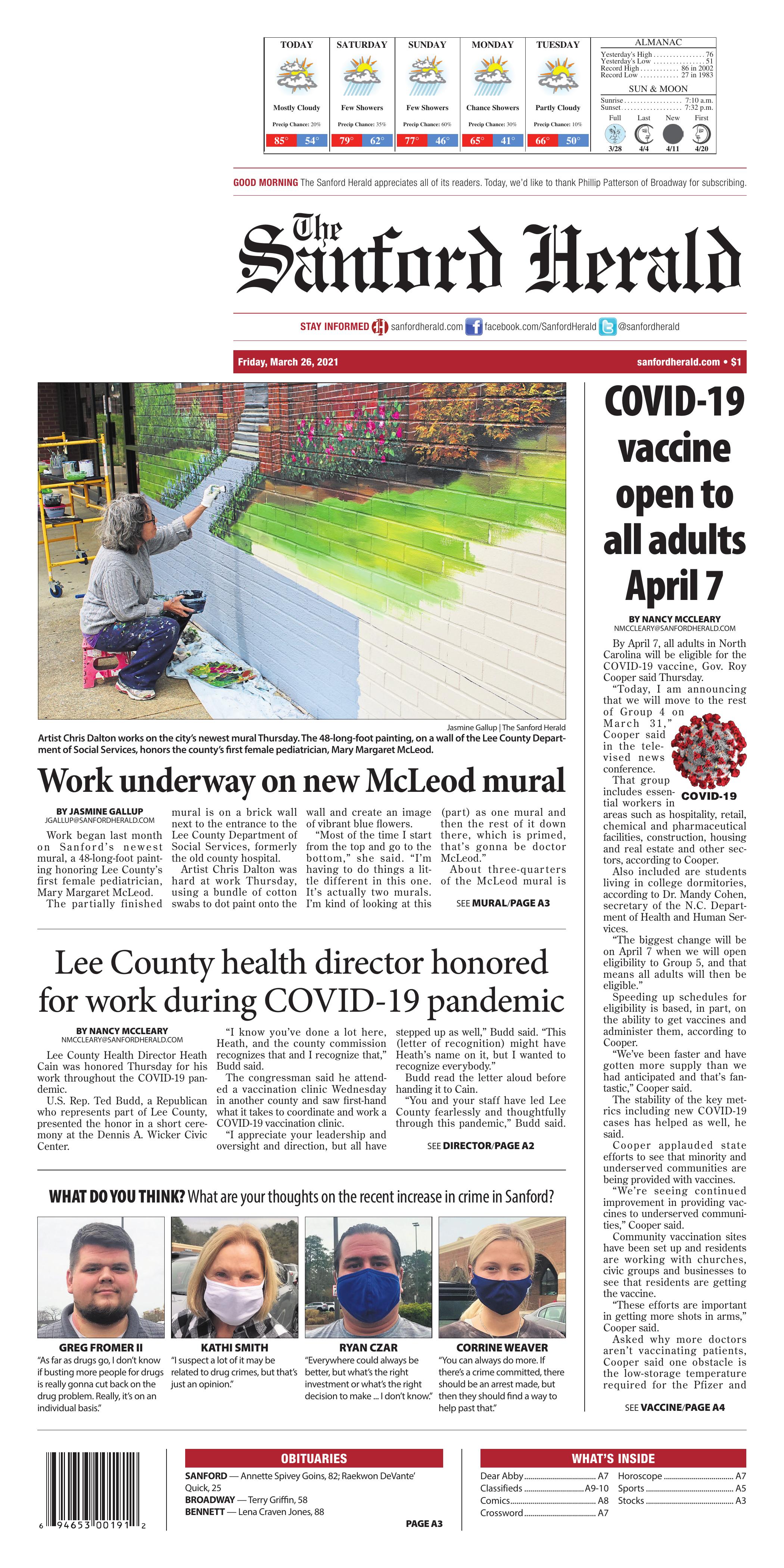 The partially finished mural is on a brick wall next to the entrance to the Lee County Department of Social Services, formerly the old county hospital.

Artist Chris Dalton was hard at work Thursday, using a bundle of cotton swabs to dot paint onto the wall and create an image of vibrant blue flowers.

“Most of the time I start from the top and go to the bottom,” she said. “I’m having to do things a little different in this one. It’s actually two murals. I’m kind of looking at this (part) as one mural and then the rest of it down there, which is primed, that’s gonna be doctor McLeod.”

About three-quarters of the McLeod mural is dedicated to an outdoor scene with five children outside McLeod’s office, which was what Dalton was working on Thursday.

The other quarter of the mural shows McLeod in an exam room with an infant. A free-hanging metal sign will eventually be added to the mural showing the years McLeod served the community, from the start of her Sanford practice in 1946 to her retirement in 1987.

The new mural brings the total number of murals in the city to 12, including the painting of butterfly wings on Charlie Watson Lane. More improvements are planned for the alley, which connects South Steele Street to Carthage Street in downtown Sanford.

Congressman Ted Budd, right, speaks during a ceremony to honor Lee County Health Department Director Heath Cain, left, and his staff for their efforts during the COVID-19 pandemic.

U.S. Rep. Ted Budd discusses items with Lee County officials during a visit Thursday. Budd came to honor the Lee County Health Department for its efforts during the pandemic.

Lee County Health Director Heath Cain was honored Thursday for his work throughout the COVID-19 pandemic.

U.S. Rep. Ted Budd, a Republican who represents part of Lee County, presented the honor in a short ceremony at the Dennis A. Wicker Civic Center.

“I know you’ve done a lot here, Heath, and the county commission recognizes that and I recognize that,” Budd said.

“I appreciate your leadership and oversight and direction, but all have stepped up as well,” Budd said. “This (letter of recognition) might have Heath’s name on it, but I wanted to recognize everybody.”

Budd read the letter aloud before handing it to Cain.

“You and your staff have led Lee County fearlessly and thoughtfully through this pandemic,” Budd said. “I want to applaud your hard work in distributing vaccines to the community in an orderly and timely manner. It is because of health departments like yours that our country will be able to defeat this virus.”

Nothing that Cain and his staff have worked continually since the pandemic began in March 2020, Budd said the team shows what it takes to combat the coronavirus.

“Your team embodies what it means to be a frontline worker and I am extremely grateful for the role they have played during the pandemic.”

The honor is shared by his staff, Cain said, especially Angie Licata, the department’s communicable disease nurse and Nursing Supervisor Jessica Miller. Both attended the ceremony

“These two nurses have worked seven days a week this year,” Cain said.

The coronavirus pandemic has forced the department to deal with many challenges, but the biggest one has been “adapting to change quickly,” he said.

“It will be a lot safer than a year ago.”

Budd also met with the commissioners to discuss the county’s needs.

By April 7, all adults in North Carolina will be eligible for the COVID-19 vaccine, Gov. Roy Cooper said Thursday.

“Today, I am announcing that we will move to the rest of Group 4 on March 31,” Cooper said in the televised news conference.

That group includes essential workers in areas such as hospitality, retail, chemical and pharmaceutical facilities, construction, housing and real estate and other sectors, according to Cooper.

Also included are students living in college dormitories, according to Dr. Mandy Cohen, secretary of the N.C. Department of Health and Human Services.

“The biggest change will be on April 7 when we will open eligibility to Group 5, and that means all adults will then be eligible.”

Speeding up schedules for eligibility is based, in part, on the ability to get vaccines and administer them, according to Cooper.

“We’ve been faster and have gotten more supply than we had anticipated and that’s fantastic,” Cooper said.

The stability of the key metrics including new COVID-19 cases has helped as well, he said.

Cooper applauded state efforts to see that minority and underserved communities are being provided with vaccines.

Community vaccination sites have been set up and residents are working with churches, civic groups and businesses to see that residents are getting the vaccine.

“These efforts are important in getting more shots in arms,” Cooper said.

Asked why more doctors aren’t vaccinating patients, Cooper said one obstacle is the low-storage temperature required for the Pfizer and Moderna vaccines.

While 16- and 17-year-olds will be able to receive the vaccine once Group 5 is eligible, the Pfizer shot is the only one authorized to be given to the teens, Cohen said.

North Carolina has done well in seeing that people are getting vaccinated, according to Cohen and Cooper.

“Our health care providers are working tirelessly, early and late, in our fast and fair distribution of vaccines,” Cooper said.

“As of today, we’ve administered almost 4.3 million doses and almost a third of our adult population has gotten at least one shot and one in five are fully vaccinated.”

Despite the growing number of people who have been vaccinated, Cooper cautioned that the virus continues to spread. That means people will need to continue to wear masks and act responsibly, he said.

As of Thursday, he said, 903,374 cases of COVID-19 have been reported since the pandemic began with 2,112 new cases reported Wednesday.

There are 945 people who are hospitalized, while 11,987 have succumbed to the virus.

“The vaccine is our path to recovery. It’s the road to normalcy,” Cooper said.