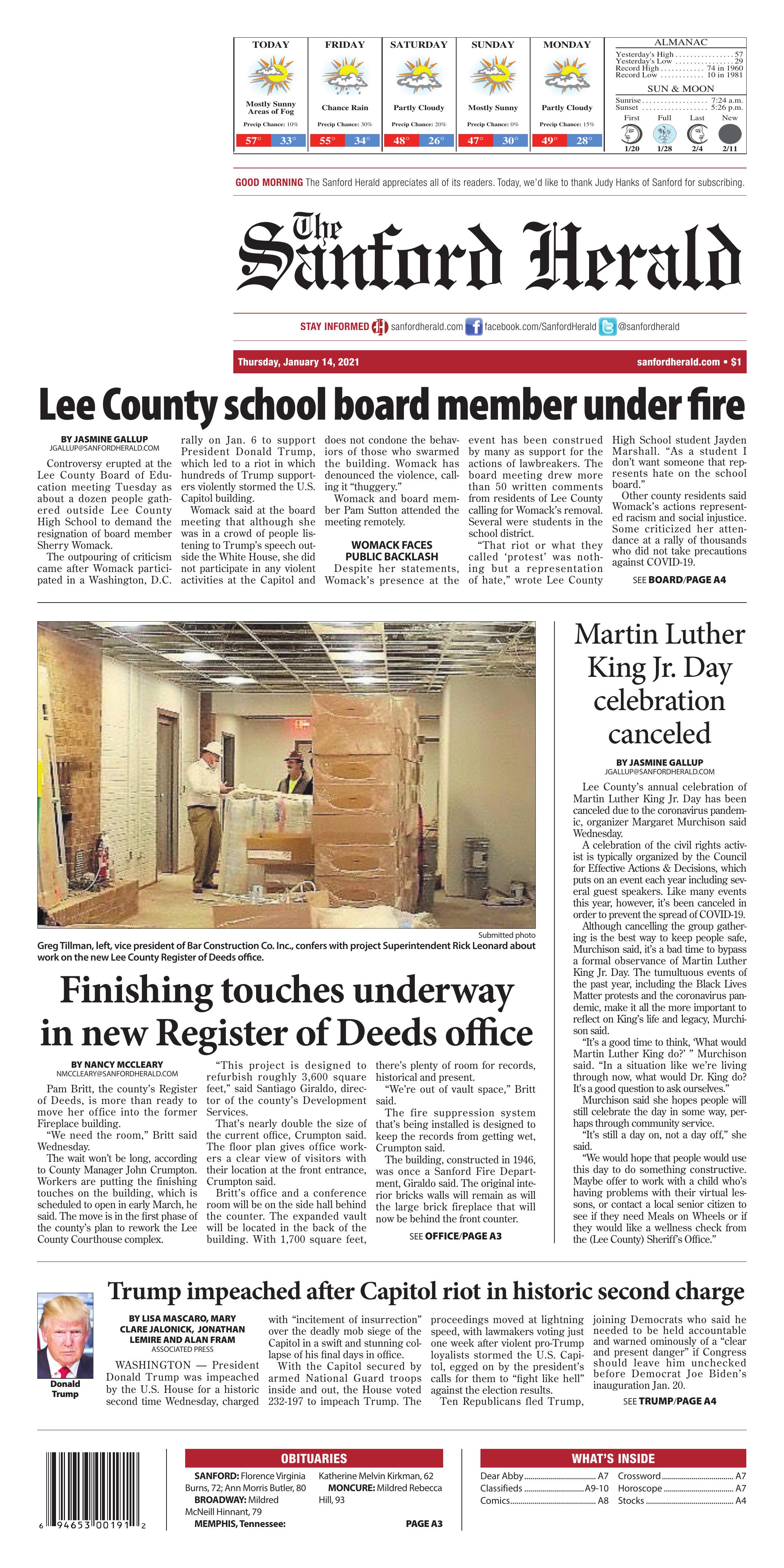 Controversy erupted at the Lee County Board of Education meeting Tuesday as about a dozen people gathered outside Lee County High School to demand the resignation of board member Sherry Womack.

The outpouring of criticism came after Womack participated in a Washington, D.C. rally on Jan. 6 to support President Donald Trump, which led to a riot in which hundreds of Trump supporters violently stormed the U.S. Capitol building.

Womack said at the board meeting that although she was in a crowd of people listening to Trump’s speech outside the White House, she did not participate in any violent activities at the Capitol and does not condone the behaviors of those who swarmed the building. Womack has denounced the violence, calling it “thuggery.”

Womack and board member Pam Sutton attended the meeting remotely.

Womack faces public backlashDespite her statements, Womack’s presence at the event has been construed by many as support for the actions of lawbreakers. The board meeting drew more than 50 written comments from residents of Lee County calling for Womack’s removal. Several were students in the school district.

“That riot or what they called ‘protest’ was nothing but a representation of hate,” wrote Lee County High School student Jayden Marshall. “As a student I don’t want someone that represents hate on the school board.”

Other county residents said Womack’s actions represented racism and social injustice. Some criticized her attendance at a rally of thousands who did not take precautions against COVID-19.

Womack was one of two members of the board to attend the meeting virtually, doing so “out of an abundance of caution,” she said. Womack said she chose to remain quarantined after her recent travel despite getting a negative COVID-19 test.

Another criticism leveled at Womack was about her presence at the rally as a member of the school board, with some saying she inappropriately represented the board.

Womack was identified as a board member in an article by USA Today, in which she is quoted as saying she traveled to the nation’s capital to “demand better election security and stronger voter ID laws ... (citing) what she believes are ‘suspicious’ videos of ballot counting in Georgia.”

Womack said Wednesday that she never claimed to be officially speaking as a member of the school board or on behalf of the board.

“Last I checked, this is a free country,” Womack said during the meeting Tuesday. “And I have a constitutionally protected right to assemble and express my concerns in public places. My service to the Lee County Board of Education is not conditioned on me waiving those rights.”

Two people wrote public comments reinforcing that point, standing up against a tidal wave of censure against Womack.

“I am dismayed that you are crucifying a board member for their political beliefs,” wrote Cindi McGee. “Shame on you and your attempts to silence diversity of thought.”

Several members of the public cited policy code 2220, which mandates official spokespersons of the school district “shall conduct his or her assignment from the standpoint of the best interests of the board, the school district or the community, not as a representative of his or her own personal ideas or feelings.”

The motion to investigate Womack, made by Democrat Pat McCracken, was approved 5-2 in a departure from party lines. Republicans Womack and Pam Sutton voted against, while Republicans Sandra Bowen and Christine Hilliard, and Democrats McCracken, Patrick Kelly and Lynn Smith voted in favor of the probe.

“I welcome them doing an investigation because I’ve done absolutely nothing wrong,” Womack said Wednesday. “What I’m against is wasting taxpayer dollars and time. We had more important things we should have been discussing that night.”

Elementary and middle school stay open, board defers decision on high schoolsDiscussion of school re-openings was largely overshadowed by the political controversy over Womack’s actions, but the school board did decide in a narrow 4-3 vote to keep elementary and middle schools open — for a mixture of in-person and remote learning — while deferring a decision on high schools — currently all-virtual.

The vote again departed from party lines, with Republican Womack and Democrats Kelly and McCracken voting against, and Democrat Smith and Republicans Bowen, Sutton and Hilliard voting for.

Before voting, the board heard a report from pediatrician and infectious disease specialist Mike Smith, who has been working with Lee County and other school districts to educate officials about the coronavirus.

Smith’s research shows that in the school setting, secondary transmission of the virus is scarce, meaning if infected, students don’t tend to spread the infection to people around them. In one study of 733 students who had COVID-19, only 32 secondary infections were recorded, Smith said.

Part of the reason for the low rate is that children are less likely to spread the virus than adults, he said. Another reason is that schools have staff who are able to strictly enforce protocols like mask-wearing and social distancing, which reduce the spread of the virus. Enforcement of safety rules in other locations like public parks or grocery stores can be more lax, Smith said.

Lee County Nurse Supervisor Mary Hawley agreed with the assessment, saying the data collected by the district shows most COVID-19 infections originate outside school buildings and there is little secondary spread.

Another issue influencing school re-openings is the ability of staff to effectively supervise students, said Superintendent Andy Bryan. With many teachers quarantined because of possible exposure to the virus, there may come a time when the district has to move to all-virtual for a particular grade level or school, Bryan said.

“I have seen the death that this can cause firsthand,” Kelly said, noting he’s consoled the wife of a school employee who died from COVID-19. “I’m not willing to risk someone’s life at this point.”

Hilliard said she wanted high school students to have the option to attend class in-person, but feared reopening schools with such a high rate of positive cases in the community. She and Bowen each said they thought the closure of elementary and middle schools would not help mitigate spread of the virus.

Pam Britt, the county’s Register of Deeds, is more than ready to move her office into the former Fireplace building.

The wait won’t be long, according to County Manager John Crumpton. Workers are putting the finishing touches on the building, which is scheduled to open in early March, he said. The move is in the first phase of the county’s plan to rework the Lee County Courthouse complex.

Britt’s office and a conference room will be on the side hall behind the counter. The expanded vault will be located in the back of the building. With 1,700 square feet, there’s plenty of room for records, historical and present.

The fire suppression system that’s being installed is designed to keep the records from getting wet, Crumpton said.

The building, constructed in 1946, was once a Sanford Fire Department, Giraldo said. The original interior bricks walls will remain as will the large brick fireplace that will now be behind the front counter.

The walls are painted gray and the chairs will be covered in shades of blue and green, Britt said. The hallway will have tile while the offices will be carpeted, Crumpton said. A new parking lot has been developed on the north side of the building.

Bar Construction Company was the low bidder for the project, which also includes updates to the courthouse, historic courthouse and government center. Renovation of the Fireplace building is estimated to cost $1.1 million, with the total project having a budget of $6.3 million.

Crumpton said he could envision the area becoming a campus for county and court offices and courthouses.

Britt is pleased. The move to the older building is what she has longed for.

“That has been my dream since I began working in the Register of Deeds office,” Britt said. “When the county acquired it, I was ready.”

A celebration of the civil rights activist is typically organized by the Council for Effective Actions & Decisions, which puts on an event each year including several guest speakers. Like many events this year, however, it’s been canceled in order to prevent the spread of COVID-19.

Although cancelling the group gathering is the best way to keep people safe, Murchison said, it’s a bad time to bypass a formal observance of Martin Luther King Jr. Day. The tumultuous events of the past year, including the Black Lives Matter protests and the coronavirus pandemic, make it all the more important to reflect on King’s life and legacy, Murchison said.

“It’s a good time to think, ‘What would Martin Luther King do?’ ” Murchison said. “In a situation like we’re living through now, what would Dr. King do? It’s a good question to ask ourselves.”

Murchison said she hopes people will still celebrate the day in some way, perhaps through community service.

“We would hope that people would use this day to do something constructive. Maybe offer to work with a child who’s having problems with their virtual lessons, or contact a local senior citizen to see if they need Meals on Wheels or if they would like a wellness check from the (Lee County) Sheriff’s Office.”