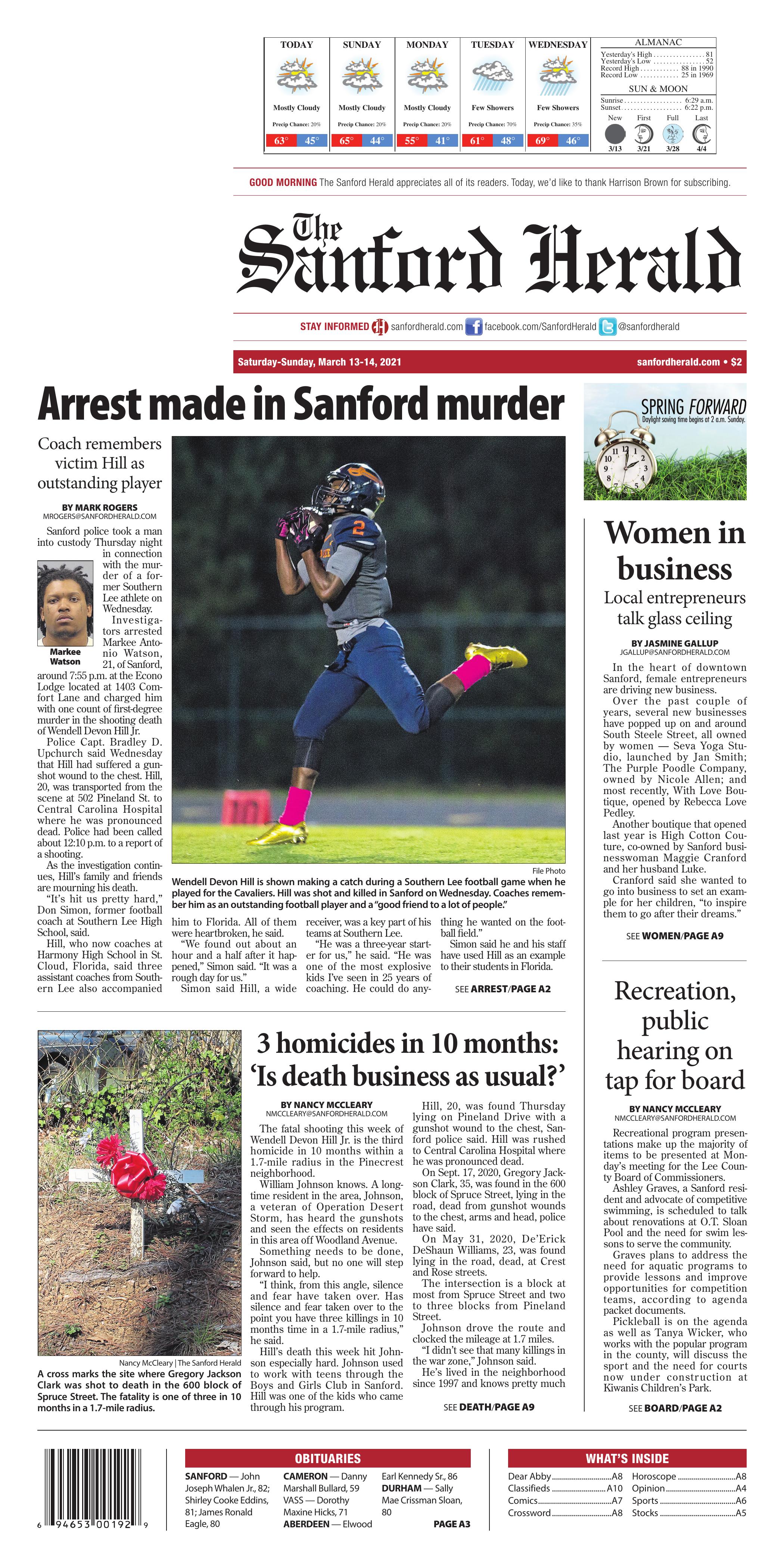 Archives
Arrest made in Sanford murder

Sanford police took a man into custody Thursday night in connection with the murder of a former Southern Lee athlete on Wednesday.

Investigators arrested Markee Antonio Watson, 21, of Sanford, around 7:55 p.m. at the Econo Lodge located at 1403 Comfort Lane and charged him with one count of first-degree murder in the shooting death of Wendell Devon Hill Jr.

Police Capt. Bradley D. Upchurch said Wednesday that Hill had suffered a gunshot wound to the chest. Hill, 20, was transported from the scene at 502 Pineland St. to Central Carolina Hospital where he was pronounced dead. Police had been called about 12:10 p.m. to a report of a shooting.

As the investigation continues, Hill’s family and friends are mourning his death.

Simon, who now coaches at Harmony High School in St. Cloud, Florida, said three assistant coaches from Southern Lee also accompanied him to Florida. All of them were heartbroken, he said.

“We found out about an hour and a half after it happened,” Simon said. “It was a rough day for us.”

Simon said Hill, a wide receiver, was a key part of his teams at Southern Lee.

“He was a three-year starter for us,” he said. “He was one of the most explosive kids I’ve seen in 25 years of coaching. He could do anything he wanted on the football field.”

Simon said he and his staff have used Hill as an example to their students in Florida.

“We bring him up all the time down here,” Simon said. “It’s a shame we have to talk about him like this now.”

Simon added that Hill was well liked at Southern Lee.

Funeral arrangements for Hill are pending at Knotts Funeral Home in Sanford.

In 2016, Watson was sentenced in Lee County to between four and six years in prison on a charge of discharging a firearm into an occupied vehicle, according to N.C. Department of Public Safety records.

Watson was granted parole, but charged in May 2019 with violating the terms of his release and being a felon in possession of a firearm, records show. He was sentenced to between 14 and 26 months in prison on the charges. He released on probation Oct. 29, according to the records.

A cross marks the site where Gregory Jackson Clark was shot to death in the 600 block of Spruce Street. The fatality is one of three in 10 months in a 1.7-mile radius.

The fatal shooting this week of Wendell Devon Hill Jr. is the third homicide in 10 months within a 1.7-mile radius in the Pinecrest neighborhood.

William Johnson knows. A longtime resident in the area, Johnson, a veteran of Operation Desert Storm, has heard the gunshots and seen the effects on residents in this area off Woodland Avenue.

Something needs to be done, Johnson said, but no one will step forward to help.

Hill’s death this week hit Johnson especially hard. Johnson used to work with teens through the Boys and Girls Club in Sanford. Hill was one of the kids who came through his program.

Hill, 20, was found Thursday lying on Pineland Drive with a gunshot wound to the chest, Sanford police said. Hill was rushed to Central Carolina Hospital where he was pronounced dead.

On Sept. 17, 2020, Gregory Jackson Clark, 35, was found in the 600 block of Spruce Street, lying in the road, dead from gunshot wounds to the chest, arms and head, police have said.

The intersection is a block at most from Spruce Street and two to three blocks from Pineland Street.

Johnson drove the route and clocked the mileage at 1.7 miles.

“I didn’t see that many killings in the war zone,” Johnson said.

He’s lived in the neighborhood since 1997 and knows pretty much everyone who lives there. As Johnson drives down a street, he points at different houses.

A retired teacher lives in one, a retired UPS driver in another. That woman in that house, he says pointing, works in a bank. That woman works in a hair salon, Johnson says as he drives past another residence.

His neighbors are good people, he said, but they stay silent amidst the violence.

“When somebody gets killed, everybody gets quiet,” Johnson said. “What’s the solution if all you do is close your door and not hear anything? You’re not going to tell me you don’t hear gunshots. I heard them so loud I thought it was in my living room.”

He was in his living room early one morning, when he heard gunshots ringing out.

“It was so close, it sounded like it was my living room. Ta-ta-ta-ta-tat,” he said, mimicking the sound of bullets.

The reason for the slayings remains a mystery, Johnson said.

“Nobody seems to know (what happened),” he said. “Three deaths and nobody can tell you. It’s like it never happened.”

Johnson wonders if the residents have become so accustomed to the sound of gunfire that they don’t hear it anymore.

The killings have angered Johnson, who is Black.

“If Black lives matter, why do they keep splattering,” he said.

Johnson said the community needs to come together to address the violence and try to stop it. The time for silence has ended.

In the heart of downtown Sanford, female entrepreneurs are driving new business.

Over the past couple of years, several new businesses have popped up on and around South Steele Street, all owned by women — Seva Yoga Studio, launched by Jan Smith; The Purple Poodle Company, owned by Nicole Allen; and most recently, With Love Boutique, opened by Rebecca Love Pedley.

Another boutique that opened last year is High Cotton Couture, co-owned by Sanford businesswoman Maggie Cranford and her husband Luke.

Cranford said she wanted to go into business to set an example for her children, “to inspire them to go after their dreams.”

Although Cranford’s industry is more driven by women, owning and operating a boutique isn’t just about fashion. In addition to her shopping skills, communication and interpersonal skills are key, Cranford said. She prides herself on establishing relationships with her customers and getting to know them.

Cranford’s advice for other women and girls looking to go into business started with encouragement.

“You go girl!” she said. “Find your passion and turn your dream into your success story!”

Cranford advised aspiring female entrepreneurs to take their time, create a business plan and use local resources. Cranford often talks to the other business owners on Steele Street for advice, she said.

“Don’t be afraid to ask questions,” she said. “I am privileged to have Boss Babes as friends and we are always confiding in each other, bouncing ideas off one other another. It’s a sisterhood.”

Sanford has more than its fair share of female business owners, but that’s not the case everywhere. According to the National Association of Women Business Owners, 39% of privately held firms in the United States are owned by women.

Those businesses generated $1.7 million in sales as of 2017, but that’s still less than male-owned businesses. Only 20% of businesses that earn more than $1 million in revenue are women-owned.

Although women account for 52.5% of the college-educated workforce, they are underrepresented in leadership positions, according to the Center for American Progress.

In law, only 22.7% of women are partners, compared to 45% who are associates. In finance, 61% are accountants or auditors, but only 37% are financial analysts. At the highest levels of business, only 12.5% of women are chief financial officers in Fortune 500 companies.

“A big reason why women are held back is that even those who are working full-time are still expected to do the bulk of the housework,” said Meg Moss, executive director of the Chamber of Commerce. “Oftentimes, men have more flexibility to work longer hours because of that.”

The coronavirus pandemic has made the gender gap even more obvious, as more women than men opt to work from home or temporarily stop working to oversee their children’s virtual education, Moss said.

“Working practices should change to accommodate the needs of women who are half of the adult population,” she said.

Moss’ advice to women looking to advance their careers is to educate themselves about the areas they want to work in. Women should take advantage of leadership training, look for opportunities for to earn additional qualifications or certifications, and continue reading and taking classes.

“Find a mentor. Whether they (women) are starting their own business or trying to move ahead and be promoted where they’re working, find a female mentor who can help lead them in the right direction,” she said. “Never stop learning, because that’s how you’re going to grow into higher positions.”

Moss also encouraged women to take initiative in asking for promotions and raises.

“If you’re working in a company or an organization and there’s a job that you want that’s a promotion, tell them you want the job. A lot of times women are scared to do that,” she said. “It goes back to women being confident and competent in their areas of work.”

Recreational program presentations make up the majority of items to be presented at Monday’s meeting for the Lee County Board of Commissioners.

Ashley Graves, a Sanford resident and advocate of competitive swimming, is scheduled to talk about renovations at O.T. Sloan Pool and the need for swim lessons to serve the community.

Graves plans to address the need for aquatic programs to provide lessons and improve opportunities for competition teams, according to agenda packet documents.

Pickleball is on the agenda as well as Tanya Wicker, who works with the popular program in the county, will discuss the sport and the need for courts now under construction at Kiwanis Children’s Park.

The commissioners will be asked to approve an agreement with the Old North State League, a summer collegiate baseball league that gives players a chance to work on their skills, documents said.

Under the five-year agreement, the league will pay $6,000 to the county for use of one of the four fields at Tramway Road Park for practices and tournaments during the 60-day season, according to documents.

The county’s Parks and Recreation Department and Lee County will have priority on field use.

Commercial signs will be allowed on fences during the season, but must be removed when it’s over.

A public hearing requested by the Sanford Area Growth Alliance will be held. SAGA is asking Lee County and the city of Sanford to enter into a funding agreement for a third shell building to be put up in Central Carolina Enterprise Park.

Under the agreement, once construction is finished, the city and county will lease the building at a monthly fee of $13,542 each month, up to $325,000. The costs are to be split evenly, documents say.