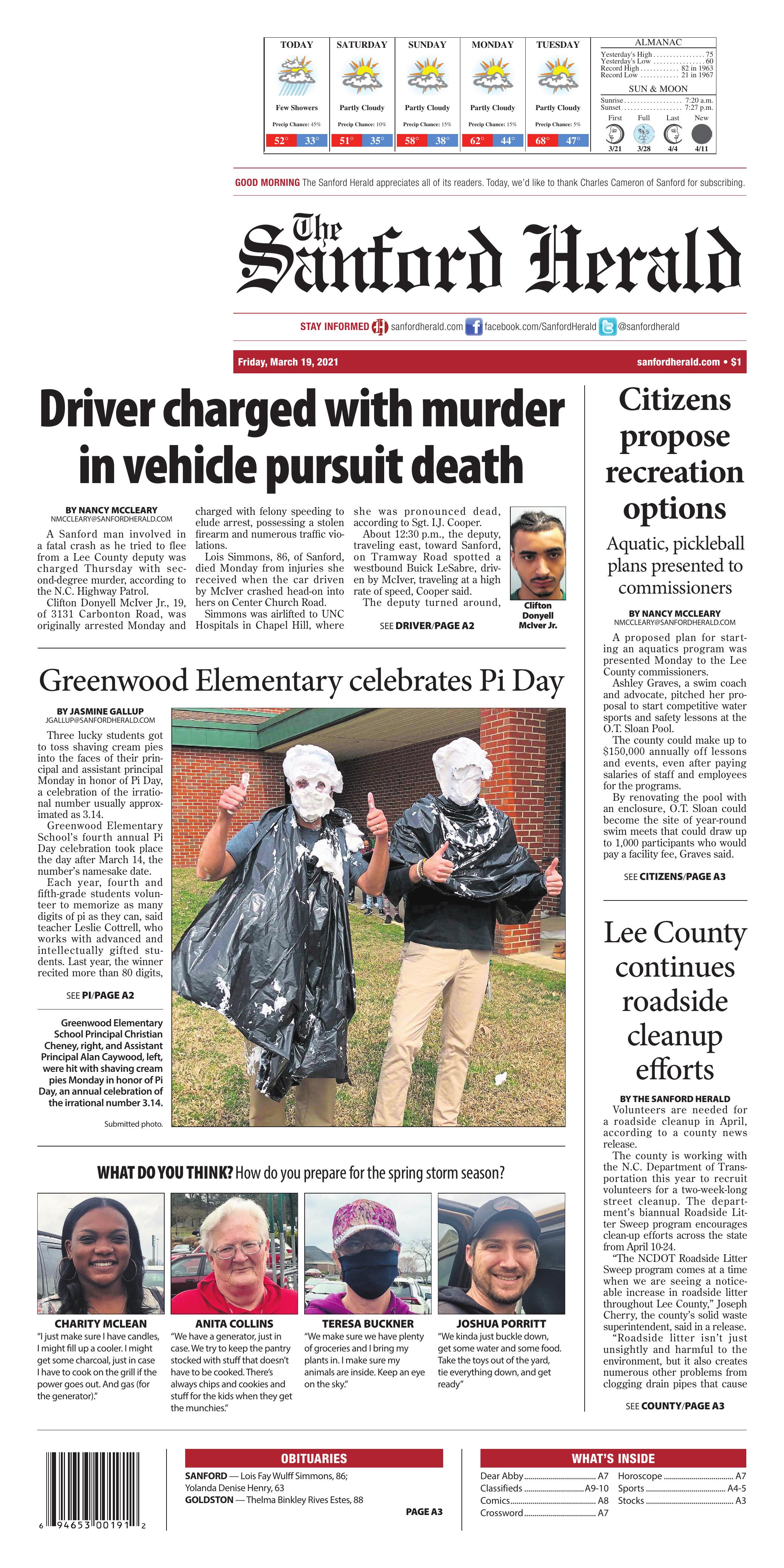 A Sanford man involved in a fatal crash as he tried to flee from a Lee County deputy was charged Thursday with second-degree murder, according to the N.C. Highway Patrol.

Lois Simmons, 86, of Sanford, died Monday from injuries she received when the car driven by McIver crashed head-on into hers on Center Church Road.

Simmons was airlifted to UNC Hospitals in Chapel Hill, where she was pronounced dead, according to Sgt. I.J. Cooper.

About 12:30 p.m., the deputy, traveling east, toward Sanford, on Tramway Road spotted a westbound Buick LeSabre, driven by McIver, traveling at a high rate of speed, Cooper said.

The deputy turned around, intending to stop McIver, who sped away. As the Buick crossed U.S. 1 onto Center Church Road, McIver lost control and collided with Simmons’ Honda Accord.

The Accord ended up in a wooded area about 50 feet off the road.

The Buick then spun around and the back hit a Honda sport utility vehicle occupied by an unidentified woman and a passenger, Cooper said.

The Buick then burst into flames, he said. McIver and a passenger in the car made it out safely, Cooper said.

McIver was charged with felony fleeing to elude arrest and possessing a stolen firearm. The weapon was found inside the vehicle, according to Capt. Brian Estes of the Lee County Sheriff’s Office.

A graveside service for Simmons, a New York State native who was married to the late Billy Simmons, is Saturday in Carthage, according to her obituary.

Three lucky students got to toss shaving cream pies into the faces of their principal and assistant principal Monday in honor of Pi Day, a celebration of the irrational number usually approximated as 3.14.

Each year, fourth and fifth-grade students volunteer to memorize as many digits of pi as they can, said teacher Leslie Cottrell, who works with advanced and intellectually gifted students. Last year, the winner recited more than 80 digits, said Cottrell.

The three winners this year were Lily Chick, Colton Brafford and Cristie Tavera. Colton recited 108 digits of pi, Cristie recited 94 and Lily recited 67, according to Cottrell.

The students were rewarded with pies to take home as well as the opportunity to pie Principal Christian Chaney and Vice Principal Alan Caywood.

Pi is a number that goes on infinitely and never repeats. About 50 trillion digits of pi are known. The current world record for number of pi decimals memorized is 67,890, held by Lu Chao of China who recited the number in 2005.

A proposed plan for starting an aquatics program was presented Monday to the Lee County commissioners.

Ashley Graves, a swim coach and advocate, pitched her proposal to start competitive water sports and safety lessons at the O.T. Sloan Pool.

The county could make up to $150,000 annually off lessons and events, even after paying salaries of staff and employees for the programs.

By renovating the pool with an enclosure, O.T. Sloan could become the site of year-round swim meets that could draw up to 1,000 participants who would pay a facility fee, Graves said.

“This is a huge amount of money and could pool maintenance for 12 weekends (of competition) and would benefit hotels and restaurants,” she said.

Graves and several other residents spoke at the commissioners’ March 1 meeting, lobbying to bring back water safety programs and expand the offerings for competitive meets.

Many of the same supporters from that meeting appeared before the commissioners on Monday, once again calling for action.

Graves’ proposal includes water safety lessons for children, something she said is needed.

An enclosed pool would allow year-round programs that could include water aerobics, classes for seniors as well as expectant mothers, according to Graves.

She called for development of a year-round and summer swim programs for the county and suggested partnering with Central Carolina Hospital for water therapy as part of injury recovery.

Graves proposed one instructor to five students in giving swimming lessons. Four of them would pay a fee while one would not be charged, based on the free and reduced lunch program.

That would provide free lessons for 4,800 children over five years.

“This is all doable very easily here in Lee County, Graves said.

With the Boys and Girls Club located on the same campus as the pool, Graves said, it would be easy to offer swim and water lessons. That might be the only opportunity some children would have.

In addition to swimming, instruction would include boat and deep water safety, drowning and rescues and teaching the basic free-style and back-stroke swim movements, Graves said.

“I would like to see a water safety program in every single elementary school grades 3 to 5, based on the program that was done earlier at Tramway Elementary,” Graves said.

The commissioners took no action.

Tonya Wicker, a Sanford resident who serves as an ambassador for the U.S. Pickleball Association, asked the commissioners to consider putting in junior tennis courts at Kiwanis Children’s Park.

The tennis courts have been removed as part of renovations and Wicker suggested putting in something different.

“It’s time for a change,” Wicker said. “Don’t put back the same thing.”

“It would increase the opportunity for youth to get involved.

Volunteers are needed for a roadside cleanup in April, according to a county news release.

The county is working with the N.C. Department of Transportation this year to recruit volunteers for a two-week-long street cleanup. The department’s biannual Roadside Litter Sweep program encourages clean-up efforts across the state from April 10-24.

“The NCDOT Roadside Litter Sweep program comes at a time when we are seeing a noticeable increase in roadside litter throughout Lee County,” Joseph Cherry, the county’s solid waste superintendent, said in a release.

“Roadside litter isn’t just unsightly and harmful to the environment, but it also creates numerous other problems from clogging drain pipes that cause flooding to attracting vermin and unwanted wildlife. This is a great volunteer opportunity that benefits the entire community and we encourage our residents to join us this April in working with the NCDOT for the Roadside Litter Sweep.”

The NCDOT will provide volunteers with clean-up supplies including trash bags, gloves and orange safety vests, according to the release.

People can sign up individually or in pairs or teams by calling Kristan Dunn, the NCDOT litter program coordinator for Lee County, at 910-944-7621.