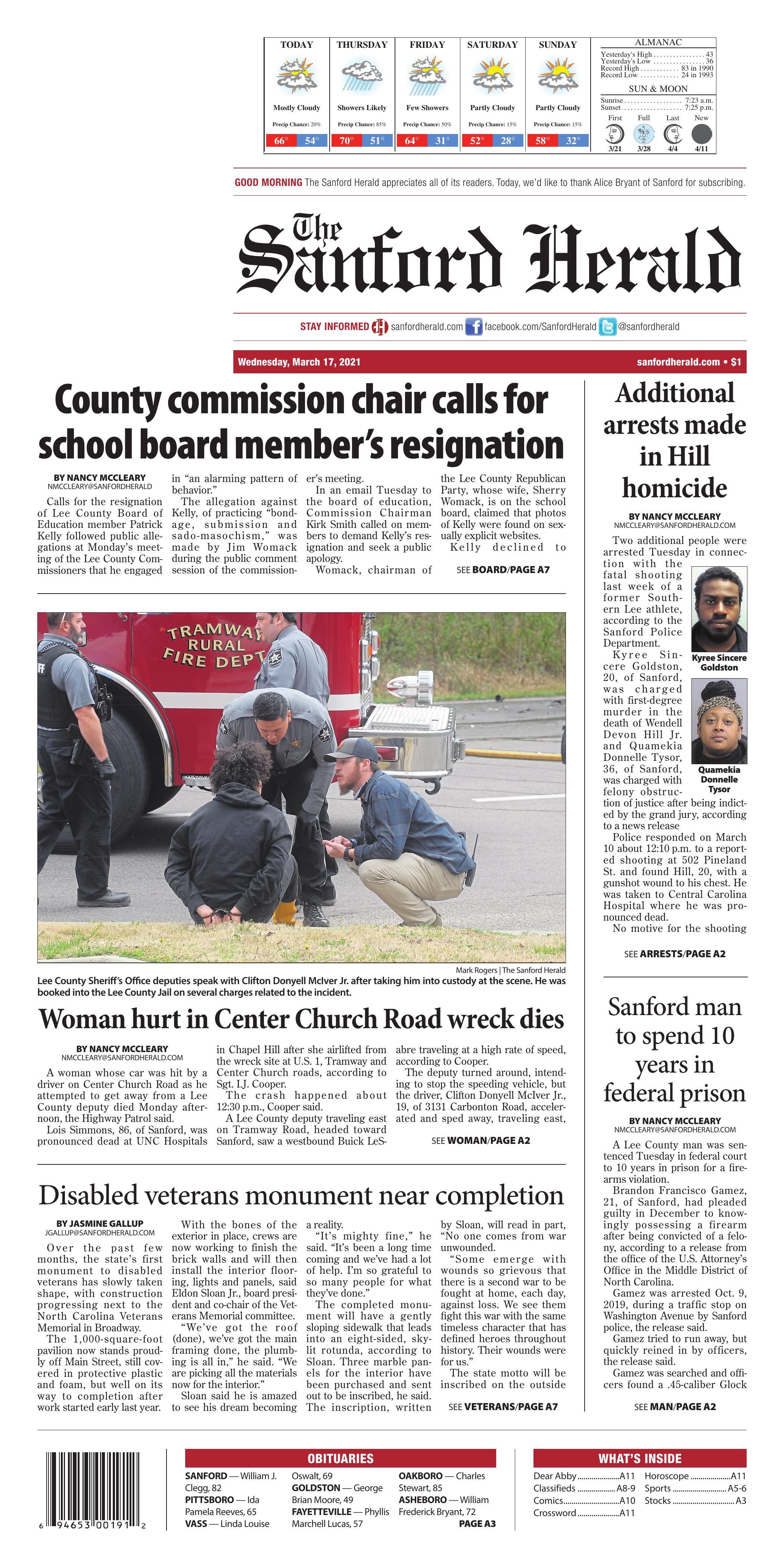 Calls for the resignation of Lee County Board of Education member Patrick Kelly followed public allegations at Monday’s meeting of the Lee County Commissioners that he engaged in “an alarming pattern of behavior.”

The allegation against Kelly, of practicing “bondage, submission and sado-masochism,” was made by Jim Womack during the public comment session of the commissioner’s meeting.

In an email Tuesday to the board of education, Commission Chairman Kirk Smith called on members to demand Kelly’s resignation and seek a public apology.

Womack, chairman of the Lee County Republican Party, whose wife, Sherry Womack, is on the school board, claimed that photos of Kelly were found on sexually explicit websites.

Kelly declined to comment Tuesday and referred all questions to his lawyer, Jonathan Silverman, who had not returned a phone call as of press time.

The photos were found by John Zumwalt, a Moore County blogger, according to Womack.

The report, taken by Detective Steve Freeman, said that Kelly “was notified by a friend that there was possibly a photo of him with a girl on a massage table that was seen on Facebook.

Kelly took photos of several pages after finding the picture in question, the report said.

“The photo was then later shared by other people in the community and emailed to members of the Lee County School Board to the employment members of the victim,” Freeman wrote.

“Case continues further investigation, nothing further to report at this time.”

The status of the case is marked as “unfounded.”

Womack handed out copies of a request for an investigation of Kelly for violating school board policy that was sent by Zumwalt to Sandra Bowen, chairman of the school board.

If violations are found, the document said, Kelly should be removed from the board.

Attached to the letter were photos allegedly taken from various sex-oriented websites.

In his remarks, Womack said the board of education was inconsistent in dealing with “allegations of misconduct.”

Two months ago, Sherry Womack attended a “Save America” rally in Washington, D.C., which preceded the insurrection resulting in the breaching of the Capitol building.

She was not involved in the attack.

“At the time, there was zero evidence she had violated any policies, ethical mandates or criminal statutes; yet, she had to tolerate the witch hunt,” Jim Womack said.

After some Lee County residents questioned Sherry Womack’s attendance at the rally, the board of education voted to look into whether she violated any policies.

The investigation turned up no wrongdoings.

“She received no apology for being subjected to this abuse,” Womack said.

Smith, in his email, referred to the “documentation and photos exposing School Board member Patrick Kelly in a rather ‘unprofessional’ image.”

Smith referred to the four women on the school board, saying “it must be extremely uncomfortable to work with an obviously misogynistic individual.”

Kelly is the assistant director of Student Outreach at Central Carolina Community College.

Lee County Sheriff’s Office deputies speak with Clifton Donyell McIver Jr. after taking him into custody at the scene. He was booked into the Lee County Jail on several charges related to the incident.

The vehicle driven by Clifton Donyell McIver Jr. smolders after a fire was extinguished following a crash that occurred on Center Church Road. McIver faces several charges after fleeing from deputies Monday.

A woman whose car was hit by a driver on Center Church Road as he attempted to get away from a Lee County deputy died Monday afternoon, the Highway Patrol said.

Lois Simmons, 86, of Sanford, was pronounced dead at UNC Hospitals in Chapel Hill after she airlifted from the wreck site at U.S. 1, Tramway and Center Church roads, according to Sgt. I.J. Cooper.

A Lee County deputy traveling east on Tramway Road, headed toward Sanford, saw a westbound Buick LeSabre traveling at a high rate of speed, according to Cooper.

The deputy turned around, intending to stop the speeding vehicle, but the driver, Clifton Donyell McIver Jr., 19, of 3131 Carbonton Road, accelerated and sped away, traveling east, toward U.S. 1, Cooper said.

Investigators have determined that McIver was traveling at least 80 mph, Cooper said.

As McIver’s car crossed the intersection onto Center Church Road, he lost control and the vehicle slammed head-on into a Honda Accord driven by Simmons, Cooper said.

The Buick then spun around, hitting a Honda sport utility vehicle with the back end before coming to a stop and bursting into flames, Cooper said.

McIver and an unidentified passenger made it safely out of the Buick.

The SUV driver and a passenger in her vehicle declined medical assistance, Cooper said.

McIver has been charged by the sheriff’s office with felony speeding to elude arrest and possessing a stolen firearm.

The gun was found inside the vehicle, according to the sheriff’s office.

The Highway Patrol is conferring with the District Attorney to determine what other charges McIver will face, Cooper said.

The state’s first memorial to honor disabled veterans is under construction off Main Street in Broadway.

Over the past few months, the state’s first monument to disabled veterans has slowly taken shape, with construction progressing next to the North Carolina Veterans Memorial in Broadway.

The 1,000-square-foot pavilion now stands proudly off Main Street, still covered in protective plastic and foam, but well on its way to completion after work started early last year.

With the bones of the exterior in place, crews are now working to finish the brick walls and will then install the interior flooring, lights and panels, said Eldon Sloan Jr., board president and co-chair of the Veterans Memorial committee.

“We’ve got the roof (done), we’ve got the main framing done, the plumbing is all in,” he said. “We are picking all the materials now for the interior.”

Sloan said he is amazed to see his dream becoming a reality.

“It’s mighty fine,” he said. “It’s been a long time coming and we’ve had a lot of help. I’m so grateful to so many people for what they’ve done.”

The completed monument will have a gently sloping sidewalk that leads into an eight-sided, skylit rotunda, according to Sloan. Three marble panels for the interior have been purchased and sent out to be inscribed, he said. The inscription, written by Sloan, will read in part, “No one comes from war unwounded.

“Some emerge with wounds so grievous that there is a second war to be fought at home, each day, against loss. We see them fight this war with the same timeless character that has defined heroes throughout history. Their wounds were for us.”

The state motto will be inscribed on the outside of the monument, and a bronze plaque dedicating the pavilion to disabled veterans will be installed near the entrance of the building.

Sloan said he hopes the monument will be finished this summer, but that there’s no set target date.

Two additional people were arrested Tuesday in connection with the fatal shooting last week of a former Southern Lee athlete, according to the Sanford Police Department.

Police responded on March 10 about 12:10 p.m. to a reported shooting at 502 Pineland St. and found Hill, 20, with a gunshot wound to his chest. He was taken to Central Carolina Hospital where he was pronounced dead.

No motive for the shooting has been given.

Goldston is also charged with three counts of shooting into an occupied dwelling from the same incident, according to Sanford police Detective Capt. Bradley D. Upchurch. The home on Pineland Street was struck by three gunshots, Upchurch said.

Goldston has a pending charge in Lee County District Court on a simple marijuana possession charge, according to court documents.

Goldston was ordered held without bond and Tysor was given a $10,000 unsecured bond.

Markee Antonio Watson, 21, of Sanford, was arrested last Thursday and also is charged with first-degree murder in Hill’s death. Watson was arrested about 7:55 p.m. at the Econo Lodge located at 1403 Comfort Lane, police have said.

Hill was a standout wide receiver at Southern Lee High School, described by a former coach as “explosive.”

Hill’s funeral is scheduled today at 1 p.m. at St. Mark United Church of God at 511 Church St. Knotts Funeral Home will livestream the service on its Facebook page.

A Lee County man was sentenced Tuesday in federal court to 10 years in prison for a firearms violation.

Brandon Francisco Gamez, 21, of Sanford, had pleaded guilty in December to knowingly possessing a firearm after being convicted of a felony, according to a release from the office of the U.S. Attorney’s Office in the Middle District of North Carolina.

Gamez was arrested Oct. 9, 2019, during a traffic stop on Washington Avenue by Sanford police, the release said.

Gamez tried to run away, but quickly reined in by officers, the release said.

Gamez was searched and officers found a .45-caliber Glock pistol, crack cocaine and oxycodone pills on him, the release said.

Sanford police test-fired the Glock and compared those shell casings to data stored in the National Integrated Ballistic Information Network.

The program is used by federal, state and local law enforcement to investigate ballistic information in spent shell casings, according to the release.

The NIBIN analysis found that the pistol taken from Gamez was involved in four shootings over a three-month period in Sanford in 2019, the release said.

One of the shootings happened Oct. 8, 2019, the day before Gamez was arrested.

Gamez had a prior conviction in 2017 in Lee County Superior Court for discharging a weapon into occupied property. In 2018, he was convicted in Superior Court of being a felon in possession of a firearm.

The case was the result of efforts from SAFE Lee County, which is part of the Project Safe Neighborhoods.

SAFE Lee County includes the offices of the District Attorney, the Sheriff’s Office, the Broadway and Sanford police departments, the N.C. Department of Public Safety Adult Community , the U.S. Attorney’s Office for the Middle District of NC and the community.