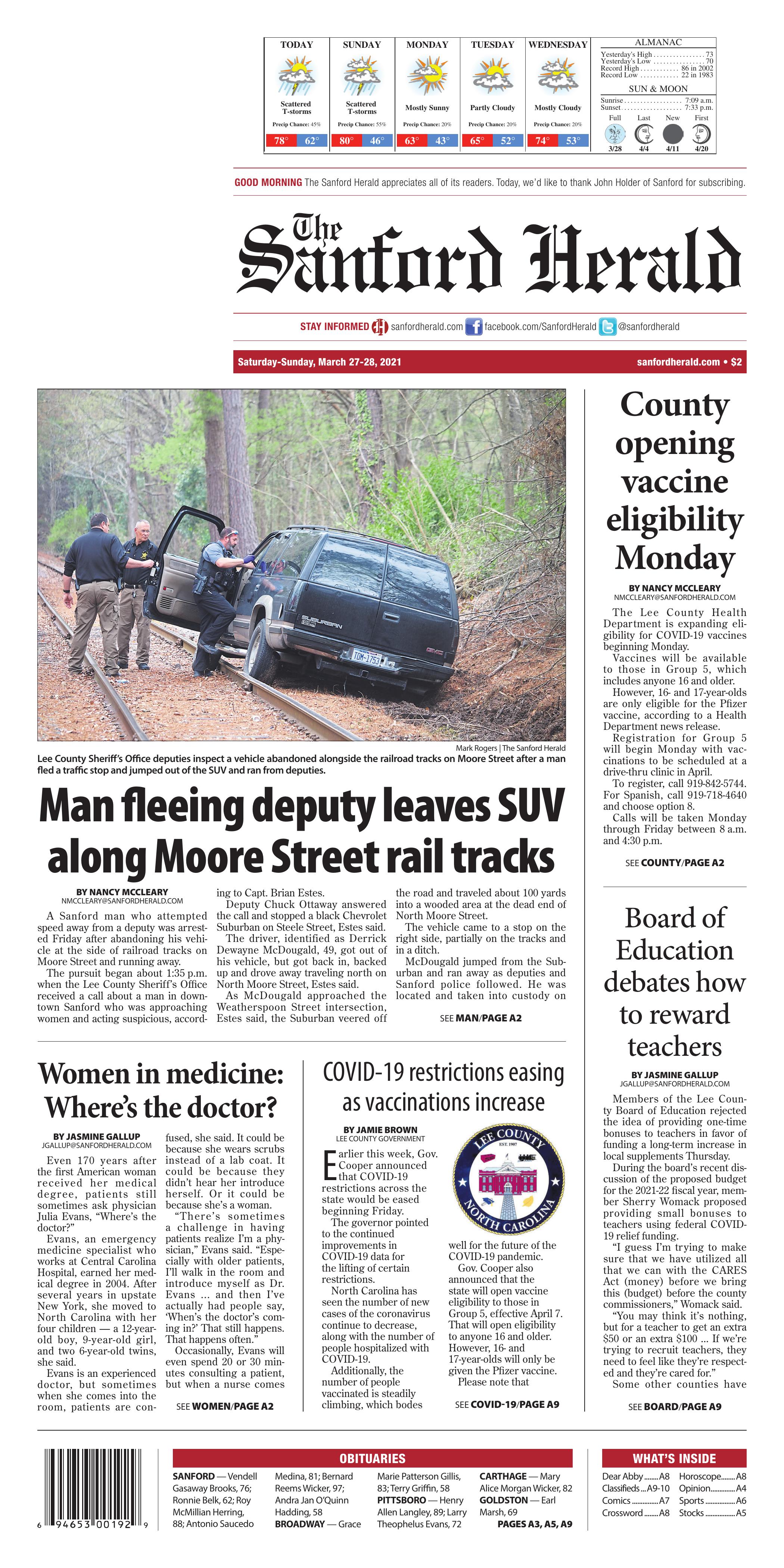 Lee County Sheriff’s Office deputies inspect a vehicle abandoned alongside the railroad tracks on Moore Street after a man fled a traffic stop and jumped out of the SUV and ran from deputies.

After fleeing from Lee County Sheriff’s Office deputies and abandoning an SUV on nearby railroad tracks, Derrick Dewayne McDougald was taken into custody in a nearby neighborhood. McDougald faces several charges in the incident.

A Sanford man who attempted speed away from a deputy was arrested Friday after abandoning his vehicle at the side of railroad tracks on Moore Street and running away.

The pursuit began about 1:35 p.m. when the Lee County Sheriff’s Office received a call about a man in downtown Sanford who was approaching women and acting suspicious, according to Capt. Brian Estes.

The driver, identified as Derrick Dewayne McDougald, 49, got out of his vehicle, but got back in, backed up and drove away traveling north on North Moore Street, Estes said.

As McDougald approached the Weatherspoon Street intersection, Estes said, the Suburban veered off the road and traveled about 100 yards into a wooded area at the dead end of North Moore Street.

The vehicle came to a stop on the right side, partially on the tracks and in a ditch.

McDougald jumped from the Suburban and ran away as deputies and Sanford police followed. He was located and taken into custody on Greensboro Avenue near McGill Street.

The sheriff’s office contacted Atlantic & Western Railway to have any trains traveling on the tracks stopped.

McDougald is charged with speeding to elude arrest, resisting arrest, driving after consuming alcohol, speeding, and reckless driving to endanger.

He is charged by A&W authorities with trespassing for remaining on the railroad right of way, Estes said.

Bail had not been set at press time.

Earlier this week, Gov. Cooper announced that COVID-19 restrictions across the state would be eased beginning Friday.

The governor pointed to the continued improvements in COVID-19 data for the lifting of certain restrictions.

North Carolina has seen the number of new cases of the coronavirus continue to decrease, along with the number of people hospitalized with COVID-19.

Additionally, the number of people vaccinated is steadily climbing, which bodes well for the future of the COVID-19 pandemic.

Gov. Cooper also announced that the state will open vaccine eligibility to those in Group 5, effective April 7. That will open eligibility to anyone 16 and older. However, 16- and 17-year-olds will only be given the Pfizer vaccine.

Please note that eligibility does not equal availability. Individuals may need to wait until they are able to find an available clinic or appointment time to receive the vaccine.

In Lee County, the Health Department will open registration for the COVID-19 vaccine to Group 5 individuals Monday.

An online pre-registration form is available at leecountync.gov/covid19. Once a form is submitted, staff will be in contact within five business days to complete the registration process.

The Health Department has been busy vaccinating our community, as well as many individuals from surrounding communities. In the past week, the department administered over 2,700 vaccinations at their drive-thru clinics Tuesday and Wednesday.

Since beginning vaccinations at the start of the year, Lee County Health Department has administered over 23,000 first-and second- doses of the COVID-19 vaccines.

Vaccinations remain one of the strongest lines of defense against the virus, and we encourage everyone eligible to get vaccinated.

But remember that while vaccinations are increasing, there are still many people in our communities who remain vulnerable.

Please continue to follow the guidance of health care professionals and wear a mask, watch your distance and wash your hands.

The easing of restrictions means we will likely see more people out in public.

Greater capacity will be allowed at local businesses and restaurants; the 11 p.m. curfew is being lifted; and mass gathering limits have been increased.

For many, these are welcome changes and we know everyone will enjoy the increased opportunities to be with family and friends.

We are hopeful that we will see a continued downward trend in new COVID-19 cases and hospitalizations so that we can have additional restrictions lifted as we return to normalcy. COVID-19 has wreaked havoc on our communities, but we are on the road to recovery.

Evans, an emergency medicine specialist who works at Central Carolina Hospital, earned her medical degree in 2004. After several years in upstate New York, she moved to North Carolina with her four children — a 12-year-old boy, 9-year-old girl, and two 6-year-old twins, she said.

“There’s sometimes a challenge in having patients realize I’m a physician,” Evans said. “Especially with older patients, I’ll walk in the room and introduce myself as Dr. Evans ... and then I’ve actually had people say, ‘When’s the doctor’s coming in?’ That still happens. That happens often.”

Occasionally, Evans will even spend 20 or 30 minutes consulting a patient, but when a nurse comes to say goodbye, they’ll say they haven’t yet seen a doctor.

“I have to go back into rooms and talk to patients and reiterate what I said, because they may not have thought it was coming from a physician,” Evans said.

Those reactions can be frustrating, but it’s more a matter of public perception than actual inequality, according to Evans. Throughout her years as a doctor, she’s felt comfortable in her workplace and hasn’t encountered sexism from male colleagues or supervisors, she said.

“When I went to med school, I think our class was about 50/50 (male/female),” Evans said. “I think we were well represented.”

Shayna Jones, an obstetrician and gynecologist at Pinehurst Surgical Clinic, had similar feelings. She’s seen more women go into medicine over the years, she said.

“I do feel like that is changing. I feel fortunate to be working in a time when it’s not such a rarity. I see more women stepping up and taking leadership roles, but I would obviously love to see even more.”

Jones and Evans each said one of the challenges they faced was finding a balance between family and career. When Evans had her first child, she was about to graduate med school, and had to return to complete required coursework just four days after she gave birth, she said.

Life became easier after she began practicing, and easier still when she started exclusively working night shifts about 11 years ago, she said. Now, Evans can attend school meetings and volunteer with the PTA.

Jones, who is often on call, said her work-life balance is a juggling act. If a woman goes into labor, Jones could be called into work at a moment’s notice.

Joining a group practice instead of running an individual practice helped, Jones said, but still, “You’re constantly questioning, are you a good mother and are you a good doctor? You want to be good at both and sometimes there is a conflict.”

Having female colleagues and mentors helps, Jones said. At her practice, there’s a camaraderie among the doctors. If she needs someone to cover a shift so she can get to her child’s school, people are willing to help, she said.

The same held true for family practice doctor Vindya Jeyaretnam, with FirstHealth Primary Care in Sanford. Jeyaretnam’s doctors growing up were mostly women, she said, so she never saw a barrier to pursuing medicine.

Patients still sometimes assume she’s a nurse or physician’s assistant, but it doesn’t bother Jeyaretnam too much, she said. As a woman, she brings something extra to the job.

“As a female, we bring a lot to medicine in terms of compassion and taking the time to listen to our patients,” she said. “I think that helps our patients get comfortable and be able to open up and discuss things with us.”

Vaccines will be available to those in Group 5, which includes anyone 16 and older.

However, 16- and 17-year-olds are only eligible for the Pfizer vaccine, according to a Health Department news release.

Registration for Group 5 will begin Monday with vaccinations to be scheduled at a drive-thru clinic in April.

Calls will be taken Monday through Friday between 8 a.m. and 4:30 p.m.

A pre-registration form is available online at leecountync.gov/covid19. Once the form is submitted, applicants will be contacted within five business day to complete the process

The Lee County Health Department is administering the Pfizer and Moderna vaccines at this time, the release said. Supplies are determined by the N.C. Department of Health and Human Services.

Participants cannot choose which vaccine is preferred; the county will administer the supply on hand, the release said.

News
School board debates how to reward teachers

Members of the Lee County Board of Education rejected the idea of providing one-time bonuses to teachers in favor of funding a long-term increase in local supplements Thursday.

“I guess I’m trying to make sure that we have utilized all that we can with the CARES Act (money) before we bring this (budget) before the county commissioners,” Womack said.

“You may think it’s nothing, but for a teacher to get an extra $50 or an extra $100 ... If we’re trying to recruit teachers, they need to feel like they’re respected and they’re cared for.”

Some other counties have provided one-time bonus payments to teachers for their work during the coronavirus pandemic, although it’s unclear whether federal COVID-19 relief funds can be spent that way.

Chairwoman Sandra Bowen said the idea of bonuses had been previously discussed in finance committee, but chief finance officer Kelly Jones advised against it.

“Ms. Jones stated that from her understanding of budgets and the law, that those were in kind of a grey area,” Bowen said. “She didn’t feel comfortable allocating funds that she could not see a clear legal authority to do so.”

Womack said she has no problem talking to state legislatures to get clarification but “(doesn’t) want to take it off the table completely.”

The discussion arose after the school district’s 2021-22 budget proposal was presented earlier this week. The proposal includes a 2% increase in local supplements for teachers and staff, raising the budget by $1.4 million over last year.

A local supplement is pay teachers receive in addition to their state salary.

“It’s kind of like a sign-on bonus, it’s the little thing that attracts the applicant to come our way,” Bowen said.

“This is for the long haul, so to speak, to make sure we continue to retain and attract teachers, because the COVID funding is eventually gonna run out,” Bryan said. “I think what you (Sherry Womack) are describing is a one-time bonus, where this is a long-term commitment to increasing someone’s local supplement permanently.”

Womack said she was also concerned about ensuring the COVID-19 relief money was spent appropriately and responsibly. The school district has already received a little more than $5 million and expects to receive an additional $8.4 million, according to Bryan.

Much of that money will be spent on summer school and educational intervention to catch students up on what they have missed during school closures, Bryan said.

“The limit on that funding extends into the fall of 2023,” he said. “As I’ve said before, I do not see this as a one-time summer school catch-up. This is a multi-year process that we’re going to have to spend those dollars on to make sure our students catch up.”

The money is tracked through state agencies and staff will also provide regular updates to the board, Bryan said.

Board member Christine Hilliard said she thinks the district has been responsible in managing the funds so far.

“In my opinion, it’s been tracked very closely,” she said. “We’ve been kept very well up to date on how that money has been spent.”