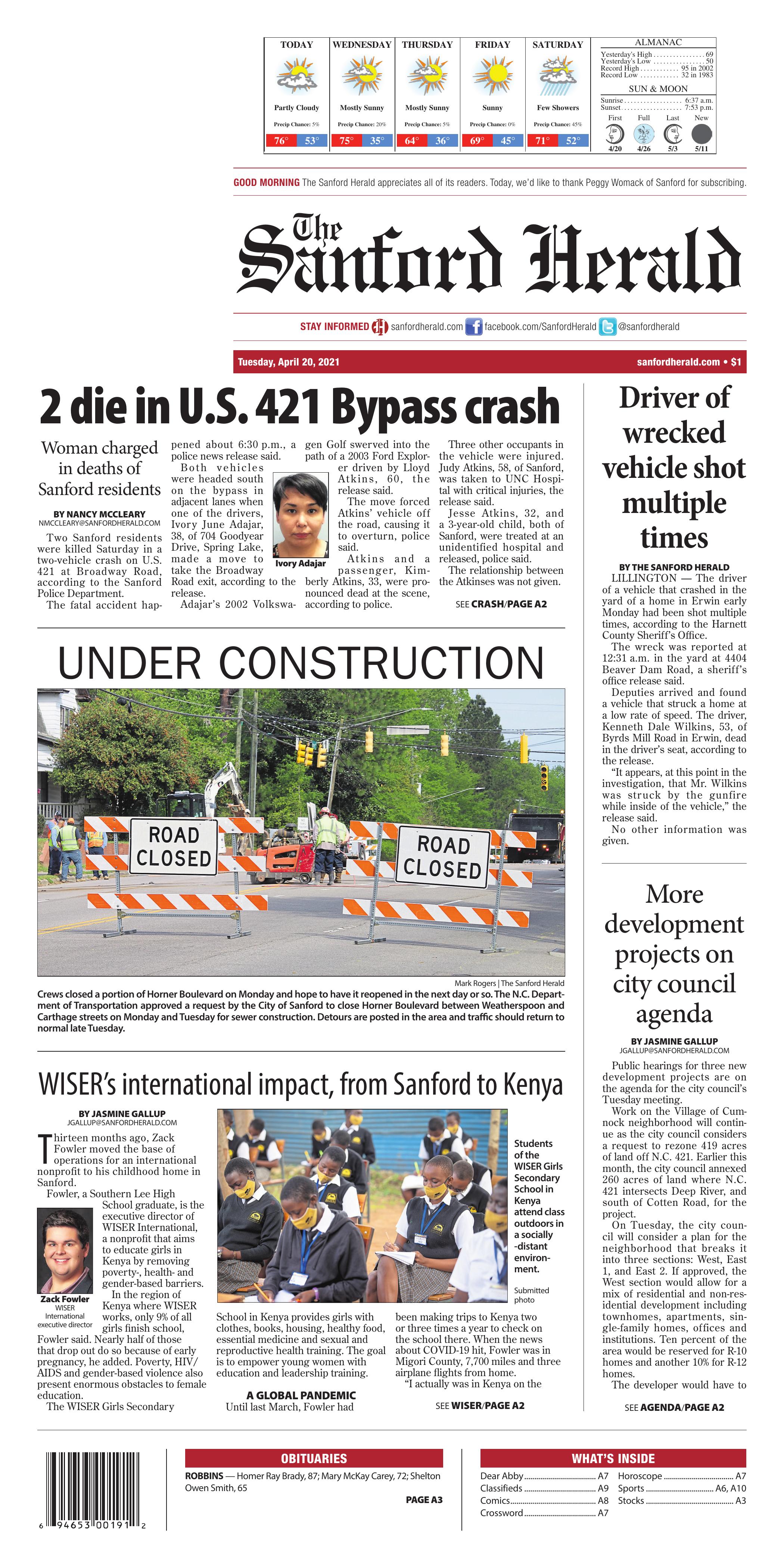 Two Sanford residents were killed Saturday in a two-vehicle crash on U.S. 421 at Broadway Road, according to the Sanford Police Department.

Both vehicles were headed south on the bypass in adjacent lanes when one of the drivers, Ivory June Adajar, 38, of 704 Goodyear Drive, Spring Lake, made a move to take the Broadway Road exit, according to the release.

Adajar’s 2002 Volkswagen Golf swerved into the path of a 2003 Ford Explorer driven by Lloyd Atkins, 60, the release said.

The move forced Atkins’ vehicle off the road, causing it to overturn, police said.

Atkins and a passenger, Kimberly Atkins, 33, were pronounced dead at the scene, according to police.

Three other occupants in the vehicle were injured. Judy Atkins, 58, of Sanford, was taken to UNC Hospital with critical injuries, the release said.

Jesse Atkins, 32, and a 3-year-old child, both of Sanford, were treated at an unidentified hospital and released, police said.

The relationship between the Atkinses was not given.

Adajar has been charged with two counts of death by motor vehicle and one count each of careless and reckless driving, a safe movement violation, having an expired registration and driving while license revoked.

She remained in the Lee County Jail on Monday with bail set at $50,000, police said. 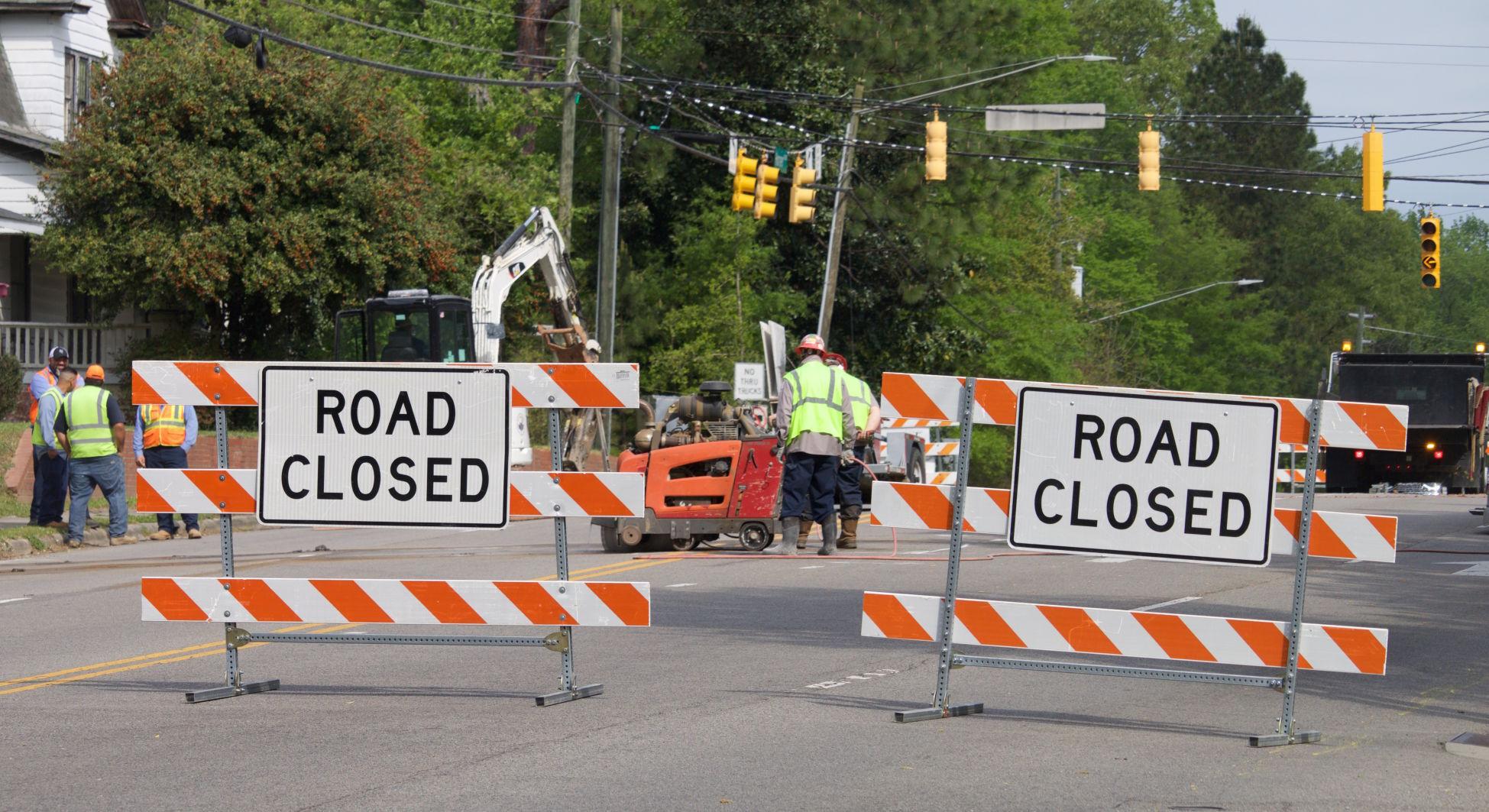 Crews closed a portion of Horner Boulevard on Monday and hope to have it reopened in the next day or so. The N.C. Department of Transportation approved a request by the City of Sanford to close Horner Boulevard between Weatherspoon and Carthage streets on Monday and Tuesday for sewer construction. Detours are posted in the area and traffic should return to normal late Tuesday.

Thirteen months ago, Zack Fowler moved the base of operations for an international nonprofit to his childhood home in Sanford.

Fowler, a Southern Lee High School graduate, is the executive director of WISER International, a nonprofit that aims to educate girls in Kenya by removing poverty-, health- and gender-based barriers.

In the region of Kenya where WISER works, only 9% of all girls finish school, Fowler said. Nearly half of those that drop out do so because of early pregnancy, he added. Poverty, HIV/AIDS and gender-based violence also present enormous obstacles to female education.

Until last March, Fowler had been making trips to Kenya two or three times a year to check on the school there. When the news about COVID-19 hit, Fowler was in Migori County, 7,700 miles and three airplane flights from home.

“I actually was in Kenya on the day it announced its first COVID-19 case on March 13,” Fowler said. “I was on our program site in Western Kenya when we got the news that in 48 hours, the school campus was going to close indefinitely.”

By the time Fowler arrived back in the United States, his entire job had changed. With schools shut down, WISER International turned to providing aid to its students, ensuring they had access to healthy food and sanitation materials to prevent the spread of COVID-19.

With the border between Kenya and Tanzania closed, a hunger crisis seemed imminent, Fowler said. The community is close to the Tanzanian border, so many families rely on purchasing large quantities of food in Tanzanian markets, where the Kenyan shilling is stronger, Fowler explained.

“The first thing we had to (do) was figure out how to keep these students and their families fed and healthy,” he said. “We started a really large relief distribution program where we were packing up essentials, healthy meals, soap and sanitation products and delivering these out from our campus.”

Over the course of about 6 months, WISER was distributed 30,000 pounds of relief materials to girls and their families, Fowler said.

“Those were the main logistics that were being run out of what we’ll call Sanford HQ,” he said.

Fowler and WISER staff were also concerned about what the stay-at-home order meant for female health, he said. They were worried about a rise in domestic violence and early pregnancy.

“For the US, the pandemic was 90% about health,” Fowler said. “For Kenya, it was partially about health, but it was also about education, pregnancy, family structure and hunger.”

WISER teachers and staff tried to reassure students they would eventually be able to return to school — that they would not be part of the 91% of female students who don’t finish their education.

“When the school closed during the pandemic, there were a lot of girls who went home afraid that was the last time they were ever going to be in WISER,” Fowler said. “(Our principal) started going to door-to-door ... literally standing in students’ front yards and saying, ‘I want to remind you that you are still a WISER girl. You have not left school, we will see you soon.’ ”

All of this was coordinated from Fowler’s kitchen table in Sanford. Fowler is used to working virtually, but when the pandemic hit, he returned to his hometown to quarantine with his parents, he said.

It was the first time in seven years Fowler wasn’t regularly boarding international flights, and it was strange to be “so deeply connected and invested in a community that is that far away,” he said.

“You have this kind of international mindset coming from a global health institute, and then when you go back to your hometown, you have this blending of your childhood memories and your future aspirations and your desire to help this international community,” Fowler said. “It’s an odd blend of focus far, far away and very near to home.”

While in Sanford, Fowler reconnected to his roots. The “ultimate hometown perk” was getting to co-host the radio station’s coverage of Southern Lee High School football games, he said. Now moving to Washington, D.C., Fowler looks back on his time in quarantine with fondness.

“It helped ground me a little bit as I was trying to do something ambitious and intimidating, at times,” he said.

By all accounts, Fowler’s efforts during the pandemic were successful. The WISER school partially reopened in October and is set to fully reopen as soon as possible.

As many schools in the region lose more than 20% of their female students to pregnancy during COVID-19 lockdowns, WISER has re-enrolled nearly 100% of its students, Fowler said.

And last week, the organization had a major win when Twitter and Square CEO Jack Dorsey gave $750,000 to WISER International.

“Any time the WISER team receives an investment or gift of any size, it’s a celebration for our whole team,” Fowler said. “It means more scholarships, housing, meals, counseling, medicine, and safety.”

LILLINGTON — The driver of a vehicle that crashed in the yard of a home in Erwin early Monday had been shot multiple times, according to the Harnett County Sheriff’s Office.

Deputies arrived and found a vehicle that struck a home at a low rate of speed. The driver, Kenneth Dale Wilkins, 53, of Byrds Mill Road in Erwin, dead in the driver’s seat, according to the release.

“It appears, at this point in the investigation, that Mr. Wilkins was struck by the gunfire while inside of the vehicle,” the release said.

No other information was given.

Public hearings for three new development projects are on the agenda for the city council’s Tuesday meeting.

On Tuesday, the city council will consider a plan for the neighborhood that breaks it into three sections: West, East 1, and East 2. If approved, the West section would allow for a mix of residential and non-residential development including townhomes, apartments, single-family homes, offices and institutions. Ten percent of the area would be reserved for R-10 homes and another 10% for R-12 homes.

The developer would have to submit a detailed site plan for approval by the city council and follow an array of other conditions including leaving a buffer zone around Deep River and the prohibition of landfills.

The East 1 section of the Village of Cumnock would contain single family homes with a minimum lot size of 6,000-square-feet. The lots would comply with R-6 zoning standards including 20-foot front and rear setbacks.

The East 2 section has identical zoning conditions, with the added provision that there will be a buffer around the flood zone next to Big Buffalo Creek and the developers will reserve space for a future, 40-foot greenway trail along the creek.

Also Tuesday, the city council will consider an application by Audentes Therapeutics to rezone its site in Central Carolina Enterprise Park to install a 184-square-foot sign off Colon Road, as opposed to the 80-square-foot sign currently allowed.

Finally, there is an application by Lee County to rezone 1 acre of land on Douglas Drive to allow for the construction of a new parking lot for the County of Lee Transit System, or COLTS.