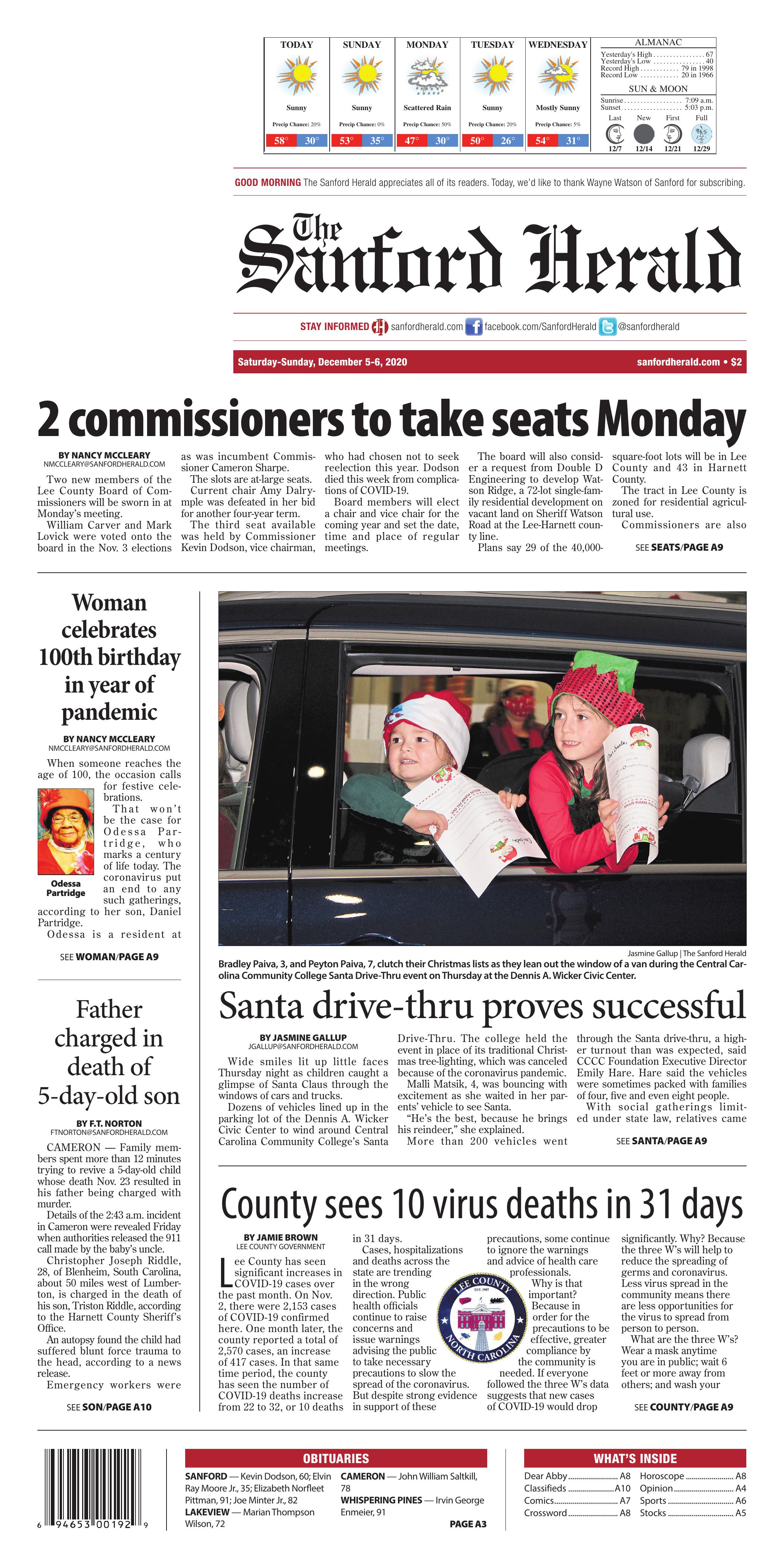 Two new members of the Lee County Board of Commissioners will be sworn in at Monday’s meeting.

William Carver and Mark Lovick were voted onto the board in the Nov. 3 elections as was incumbent Commissioner Cameron Sharpe.

The slots are at-large seats.

Current chair Amy Dalrymple was defeated in her bid for another four-year term.

The third seat available was held by Commissioner Kevin Dodson, vice chairman, who had chosen not to seek reelection this year. Dodson died this week from complications of COVID-19.

Board members will elect a chair and vice chair for the coming year and set the date, time and place of regular meetings.

The board will also consider a request from Double D Engineering to develop Watson Ridge, a 72-lot single-family residential development on vacant land on Sheriff Watson Road at the Lee-Harnett county line.

The tract in Lee County is zoned for residential agricultural use.

Commissioners are also being asked to adopt a resolution declaring the passage of the Parks and Recreation bonds in the November election.

Other items include consideration of a contract for work to be done at the Bob E. Hales Center at 147 McIver St.; and consideration of a request from the Sanford-Lee County Regional Airport Authority asking for an additional $200,000 from the Airport Tax Reserve Fund. The money is to be used to supplement $1.8 million in grant funding to build a $2 million aircraft storage hangar.

Because of COVID-19 related restrictions on mass gatherings and social distancing, the public is encouraged to watch the meeting at http:///tv.cccc.edu:8080/CablecastPublicSite/?chan nel+1 or on Channel 192 of Broadcast Charter//Spectrum Cable.

Bradley Paiva, 3, and Peyton Paiva, 7, clutch their Christmas lists as they lean out the window of a van during the Central Carolina Community College Santa Drive-Thru event on Thursday at the Dennis A. Wicker Civic Center.

Wide smiles lit up little faces Thursday night as children caught a glimpse of Santa Claus through the windows of cars and trucks.

Dozens of vehicles lined up in the parking lot of the Dennis A. Wicker Civic Center to wind around Central Carolina Community College’s Santa Drive-Thru. The college held the event in place of its traditional Christmas tree-lighting, which was canceled because of the coronavirus pandemic.

Malli Matsik, 4, was bouncing with excitement as she waited in her parents’ vehicle to see Santa.

“He’s the best, because he brings his reindeer,” she explained.

More than 200 vehicles went through the Santa drive-thru, a higher turnout than was expected, said CCCC Foundation Executive Director Emily Hare. Hare said the vehicles were sometimes packed with families of four, five and even eight people.

With social gatherings limited under state law, relatives came together instead — parents brought in-laws, brothers brought sisters and grandfathers brought grandchildren. Many were eager to find some holiday cheer after the pandemic prompted the cancellation of other traditional holiday events in town.

“We found some (events), but we are really scared to do stuff outside,” said mom Giselle Shady, who drove by the sparkling lights and blow-up decorations with her 2-year-old daughter Kara. “I try, every night when I come back from work, to take her around the streets to see the lights, because she is in love. I think this is the first year she is enjoying the Christmas spirit.”

Another family, the Roofs, were thrilled to get out of the house.

“With everything going on, a little positivity is a good thing,” said mom Camden Roof, who brought her 3-year-old daughter Adriel. “We usually do a tradition where we go around and see lights and everything, so this is kind of like a precursor to doing that with everybody.”

When cars did finally pull up to meet Santa, the jolly ol’ elf greeted children with a booming, “Ho, ho ho, merry Christmas!”

“You’ve gotten so big since last year,” shouted Santa, protected behind red velvet rope, to one boy leaning out the window of the family vehicle. After exchanging pleasantries, Santa bid adieu with a hearty, “See you soon!”

Hare said she was touched to see the families enjoying themselves during such a difficult time.

“I cried when I saw one girl see Santa,” Hare said. “The kids just light up. Santa’s there, he’s real. It’s spectacular. If it makes people happy in the community and we can give back for all they give to us, the college, it’s the least we can do.

Cases, hospitalizations and deaths across the state are trending in the wrong direction. Public health officials continue to raise concerns and issue warnings advising the public to take necessary precautions to slow the spread of the coronavirus. But despite strong evidence in support of these precautions, some continue to ignore the warnings and advice of health care professionals.

Why is that important? Because in order for the precautions to be effective, greater compliance by the community is needed. If everyone followed the three W’s data suggests that new cases of COVID-19 would drop significantly. Why? Because the three W’s will help to reduce the spreading of germs and coronavirus. Less virus spread in the community means there are less opportunities for the virus to spread from person to person.

What are the three W’s? Wear a mask anytime you are in public; wait 6 feet or more away from others; and wash your hands thoroughly and frequently. The three W’s are affordable, easy to follow, and effective in reducing virus spread. Will following the three W’s prevent an individual from catching COVID-19? Not necessarily, but it does significantly lower the risk of becoming ill and reduces the likelihood of community spread. And remember, adhering to recommendations and guidelines is not only about protecting oneself, but also about helping to support and protect your community neighbors.

We are all feeling fatigue from COVID-19 and the restrictions the pandemic has placed on our normal day-to-day lives. However, it is essential that we remain vigilant at this critical time. The pandemic will end — until then do what you can to help your family, friends, and neighbors stay safe and healthy.

When someone reaches the age of 100, the occasion calls for festive celebrations.

That won’t be the case for Odessa Partridge, who marks a century of life today. The coronavirus put an end to any such gatherings, according to her son, Daniel Partridge.

Odessa is a resident at Sanford Health & Rehabilitation where visits can only take place outside with space to practice social distancing.

“They don’t let but one or two people see her in a week,” said Partridge, 71.

She and her late husband, Johnny Vance Partridge, stayed in the community after marrying. The couple had seven children. Partridge and three sisters are still living.

“She was a very hard worker,” Partridge said of his mother. “She was strong. She was the glue that held the family together.”

Odessa was an “excellent cook” who enjoyed preparing dishes — especially chocolate and coconut cakes — during the holiday season.

“She was just a hard-working pioneer,” Partridge said.

Longevity is in the genes of Odessa’s family, he said. She had two sisters who lived more than 100 years and a cousin who lived to be 103.

“It might be in the blood, but she’s a strong believer in the Lord, too,” Partridge said.

Her strong faith is something she instilled in her children, he said.

Odessa has been at Sanford Rehabilitation for four years, Partridge said. She has some memory issues and doesn’t hear well, he said.

Though her more-than 20 grandchildren and just as many great-grandchildren won’t be with the family matriarch to mark the special birthday, their thoughts will be with her, Partridge explained.

“I’m just so thankful to have her,” he said.

CAMERON — Family members spent more than 12 minutes trying to revive a 5-day-old child whose death Nov. 23 resulted in his father being charged with murder.

Details of the 2:43 a.m. incident in Cameron were revealed Friday when authorities released the 911 call made by the baby’s uncle.

Christopher Joseph Riddle, 28, of Blenheim, South Carolina, about 50 miles west of Lumberton, is charged in the death of his son, Triston Riddle, according to the Harnett County Sheriff’s Office.

An autopsy found the child had suffered blunt force trauma to the head, according to a news release.

Emergency workers were called to 1944 Cameron Hill Road by the baby’s uncle just before 3 a.m.

“My nephew is not breathing,” the male caller said, identifying his relationship to the child. The caller’s name was not released.

In the background, a woman, presumably the baby’s mother, can be heard crying.

“He’s under a week old. He was just born Tuesday,” the uncle told the dispatcher. “He’s not breathing.”

He said the child was “completely pale.”

The dispatcher gave instructions to the caller on giving CPR to the infant.

“My sister’s boyfriend is holding him,” the caller told the dispatcher. The sheriff’s office confirmed Friday that the boyfriend was the baby’s father.

For several minutes, the dispatcher gave instructions which the uncle appeared to pass along to someone else.

The dispatcher asked at intervals if the baby was breathing.

The mother can be heard in the background asking, “Where did you put him,” and a male voice, not the caller, responding, “I put him in the swing for one minute...”

Later in the call, the woman is heard, possibly talking on the phone to her own mother, and saying, “I have no idea. Chris said he put him down in the swing for one minute..”

The end of the sentence can’t be discerned due to the distortion added to the voices on the recording by the sheriff’s office.

At one point, the caller said the infant was making noises.

“Come on, come on,” a voice can be heard urging the child.

Then, the caller told the dispatcher there was no response.

Medical crews and a deputy arrived some minutes later.

“I’ve been doing this for almost 12 minutes,” the uncle said. “I’ve been on the phone with the lady the whole time.”

The call ends there.

Riddle was arrested Wednesday in South Carolina and booked into the Harnett County jail Thursday, records show. He is being held without bail.

Nancy McCleary contributed to this report.