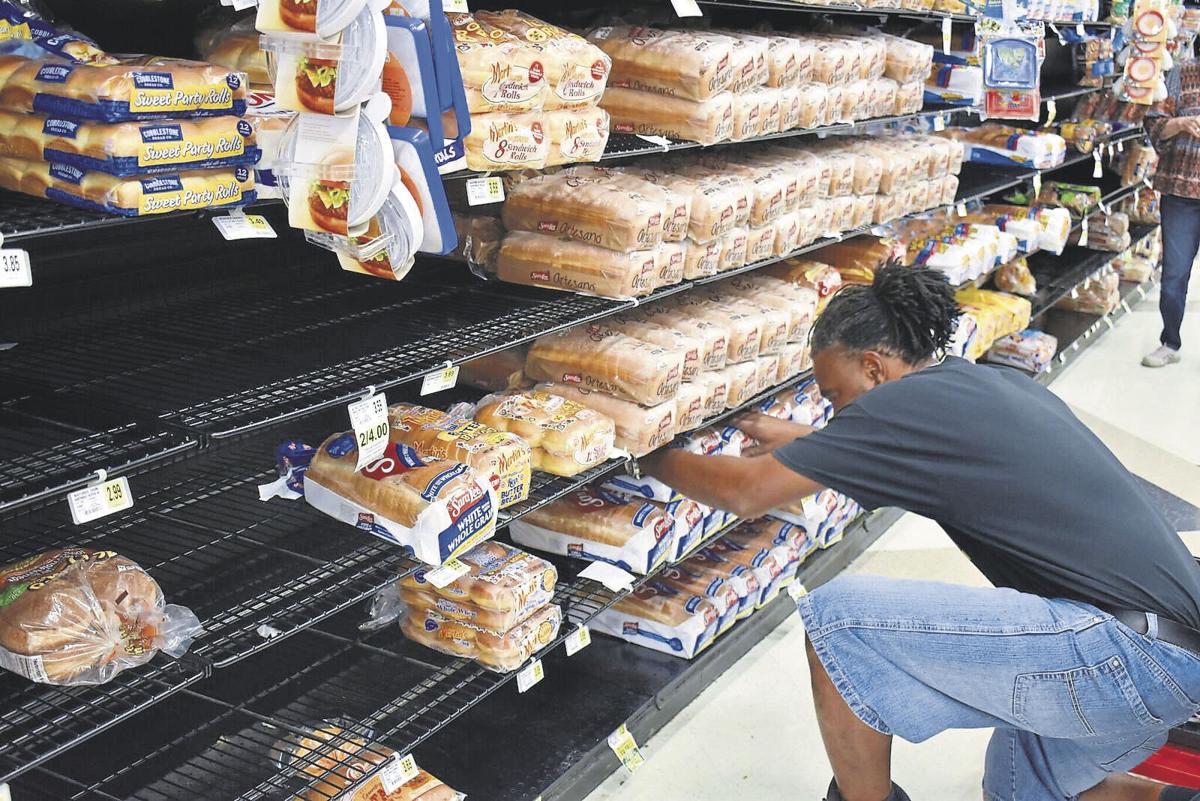 Lowes Foods employee Joshua Spencer restocks bread Tuesday after customers cleared the shelves in preparation for the coming storm. Forecasters predict Hurricane Florence, expected to hit the coast of North Carolina later this week, will bring with it days of rain that could cause extensive flooding across the state. 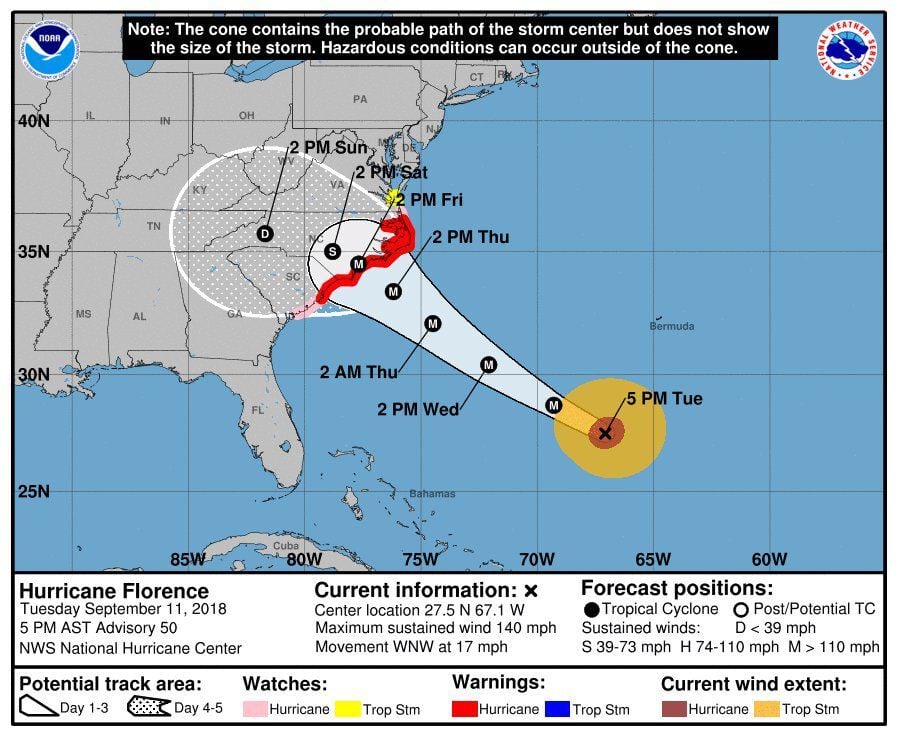 Courtesy of the National Oceanic and Atmospheric Administration

Lowes Foods employee Joshua Spencer restocks bread Tuesday after customers cleared the shelves in preparation for the coming storm. Forecasters predict Hurricane Florence, expected to hit the coast of North Carolina later this week, will bring with it days of rain that could cause extensive flooding across the state.

Courtesy of the National Oceanic and Atmospheric Administration

Hurricane Florence is steadily making her way toward the North Carolina coast, but where and when she'll land remains to be seen.

"The uncertainty is still fairly high with regards to where the storm is going to track," meteorologist Kathleen Carroll with the National Weather Service in Raleigh said Tuesday. "I think what is worrying and getting folks to take action early is this is a strong hurricane. It's expected to make land as a Category 3 or Category 4 hurricane.

"The strongest hurricane to hit the North Carolina coast was Hazel in 1954... we're expecting this storm to be a very similar strength storm."

When Hazel made landfall 64 years ago, the coastal winds were as high as 150 mph. As the storm moved rapidly inland, its winds diminished with gusts of up to 110 mph reported at Fayetteville and 90 mph at the Raleigh-Durham Airport, according to the National Hurricane Center. The official report from the Weather Bureau in Raleigh stated that as a result of Hazel, "all traces of civilization on the immediate waterfront between the state line and Cape Fear were practically annihilated."

In comparison to the behemoth Hazel, Hurricane Florence on Tuesday afternoon was about 900 miles southeast of Cape Fear as it churned west/northwest at 17 mph with 130 mph winds.

Carroll said the latest forecast predicts the storm will make landfall between the South Carolina and North Carolina coasts. Once it hits land Thursday night into Friday morning, Carroll said, the Sanford area could start seeing its effects.

"It's difficult to pin down. People (in the Sanford area) should definitely prepare for between seven to 15 inches of rain and winds of 30 to 40 mph sustained for a long period of time with gusts up to 50, 60, maybe even 70 mph," she said. “It’s expected to stall and dump a lot of rain, like catastrophic amounts of rain.”

Carroll noted that — as with any hurricane — the potential for Florence to spawn tornadoes is high as well. If the hurricane tracks west of Sanford, the tornado potential is increased, she said.

“With the high amount of rainfall, plus the winds and the storm threat — people are taking this seriously as they should,” she said.

On Monday Gov. Roy Cooper held a press conference, urging residents to prepare or evacuate if called upon to do so.

“Let me be clear, North Carolina is taking Hurricane Florence seriously, and you should get ready now,” he said.

Cooper asked for a federal disaster declaration on behalf of North Carolina to ensure the state can get federal aid as soon as possible.

Cooper made the request for federal help for the monster storm forecast to hit the state as an unprecedented hurricane, according to a news release.

With Florence bearing down on North Carolina and still having the potential to intensify in strength, Cooper urged North Carolina residents, businesses and visitors to take the threat posed by Hurricane Florence seriously.

“Florence is a threat well beyond our coasts so inland counties need to be ready as well,” Cooper said, urging residents to have plans in place.

An emergency meeting of the Lee County Board of Commissioners is scheduled for 2 p.m. today to discuss the hurricane. The meeting will be held in the county Emergency Operations Center at 204 West Courtland Drive.

County spokeswoman Jamie Brown said commissioners will receive the most current information related to the storm, the storm’s current track and expected impact on Lee County.

“Residents are urged to use the next 48 hours to plan and prepare for Hurricane Florence,” Brown said in a news release.